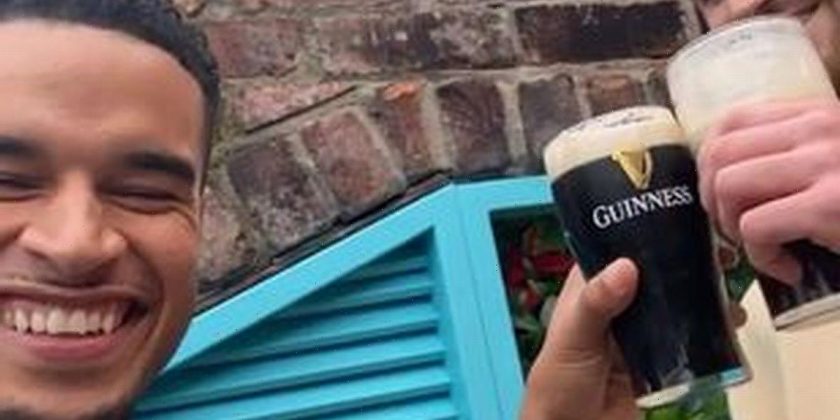 Love Island's Toby Aromolaran and Matthew MacNabb have reunited in Dublin, Ireland at the launch of Toby's boohooMAN collab.

Toby, 22, landed at Dublin Airport on Tuesday morning, before going on a road trip with his mum Victoria to her hometown of Crossmolina in Co. Mayo.

After enjoying the west of Ireland, Toby headed to the capital city to reunite with his former co-star, Matthew MacNabb.

Matthew comes from the north of Ireland and the pair celebrated Toby’s brand-new collaboration with boohooMAN at Dublin’s The Dean Hotel.

Both Toby and Matthew took to their Instagram pages to tell their followers about the reunion which comes three months after they were in the Love Island villa together.

Matthew insisted that Toby downed a pint of Guinness as they had some drinks while they caught up on one another’s lives after their crazy time in the villa.

Before this Toby spent some time in Mayo with his Irish mum Victoria.

Toby shared a pic with his mum as they posed outside of a road sign which welcomed visitors into the town.

The pair smiled from ear to ear in the photo along with Toby giving his mum a piggyback.

He captioned the snap: "Me & Mumzy back at her roots!"

While Toby has been in Ireland, his girlfriend Chloe Burrows has been living it up in London.

The three of them looked stunning as they enjoyed cocktails and posted to their social media pages to show fans their antics.

This comes after speculation that Chloe and Toby have called it quits on their love story.

Rumours were sparked when Chloe didn't turn up to Toby’s fashion launch for boohoo last week.

Because of their status as a solid couple, fans were surprised to find Chloe was nowhere to be seen at Toby's collaboration launch.

However, Toby set the record straight that the pair were still going strong and explained why Chloe wasn't at the event.

Speaking to The Sun the footballer dismissed any rumours that the pair weren't in a relationship anymore.

He said: "She wanted to come to my event so bad, but couldn't because she was in isolation waiting for her Covid test to come back."

It is thought that Chloe was isolating after returning from Dubai.