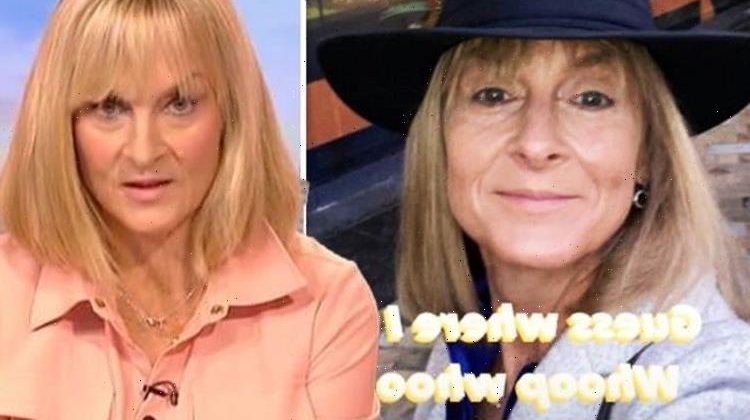 I'm A Celeb: Louise Minchin discusses her next project

Former BBC Breakfast presenter Louise Minchin has sparked a frenzy after announcing a return to BBC Breakfast after stepping down fom her role earlier this year. Taking to social media, the presenter, 53, revealed that she would be making an appearance on the show after becoming the fifth campmate to exit ITV’s I’m A Celebrity… Get Me Out Of Here! earlier this week.

Whoop whoop back on @BBCBreakfast for one day only

In view of her 234,300 followers, the former newsreader announced that she would be making a return to the red sofa this morning.

Louise wrote: “Whoop whoop back on @BBCBreakfast for one day only at 0850!”

Alongside the caption, Louise shared a snap of herself on the way to the BBC studios.

Smiling, the TV personality appeared to be in good spirits as she shared the news..

Donning a smart black hat, Louise looked chic as she paired her headwear with a light grey coat and navy shirt.

After posting her news to social media, the star was soon inundated with comments from fans excitedly anticipating her return to BBC Breakfast.

Jane Harding wrote: “You were fabulous- a much missed ray of sunshine on breakfast tv- especially at the moment!

“At least you have missed all the madness out here!”

Chula Bishop penned: “Lovely to see you back on the red sofa”, alongside a smiling face.

“Lovely to see you back,” added Sue King.

While Rigby wrote: “Great to see the Minchin on the red sofa again xx.”

One eagle-eyed follower questioned whether the mother-of-two was sporting the hat she wore while in the Welsh castle.

Jason Genders asked: “Is that the hat from the camp!!”, to which Louise replied that it was.

Charlie cut in and asked the former BBC host what it felt like to be sitting on the opposite side of the red sofa.

Louise replied: “It feels very strange, but really lovely to see you,” before going on to speak about her stint on I’m A Celebrity which she branded an “amazing” experience.

Earlier this week Louise appeared on Good Morning Britain where she surprised presenters Adil Ray and Kate Garraway with her idea for a new project away from TV.

Speaking about what she had planned following her I’m A Celebrity stint, Louise said: “What’s next? I don’t know what’s next. I’ve got lots of ideas.

Upon hearing that the former presenter was hoping to follow in Agatha Christie’s footsteps, both GMB hosts did a double-take before jokingly asking her who the “victim” was going to be.