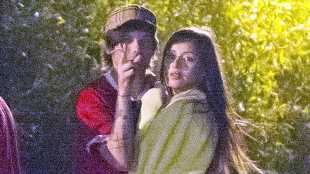 Louis Tomlinson and his girlfriend Eleanor Calder got super cozy as they embraced in a hug during a hangout on the island of Ibiza on June 1 and they looked happier than ever.

Louis Tomlinson, 27, seemed to have an enjoyable time in Ibiza on June 1 when he was spotted getting close with his longtime love Eleanor Calder, 26, during an outside hangout. The singer was taking a smoke break when he wrapped his arms around the brunette beauty and his smile proved he was having a great moment. The lovebirds were also joined by other friends at one point and they all chatted and shared laughs together. Louis looked comfortable in a red T-shirt, white shorts and a baseball cap during the outing while Eleanor sported a yellow hoodie and black shorts.

Louis’ hangout with his girlfriend, who he rekindled his romance with in 2017 after spending two years apart, happened after Liverpool’s Champion’s League win, which he was most likely thrilled about. It’s been quite some time since we’ve seen couple out in public together so this latest sighting definitely seems to indicate that their relationship is going strong.

When Louis’ not spending time with his girlfriend and friends, he’s been working hard on his debut solo album. Although there’s no release date yet, the One Direction member has been releasing various songs that are expected to be on the album over the past two years. He released his latest song “Two of Us” on Mar. 7, and the lyrics in it refer to his beloved late mother Johannah Deakin, who died at the age of 43 from leukemia in Dec. 2016. The touching music video for the track features Louis playing a piano and sitting on his own as he sings about the love he has for his mum.

Louis also recently made headlines due to the devastating passing of his younger sister, Félicité Tomlinson at the age of 18 in Mar. With the difficulties he’s been going through over the past few years, it’s good to see him enjoying good times with those closest to him and healing through his own heartwarming music.