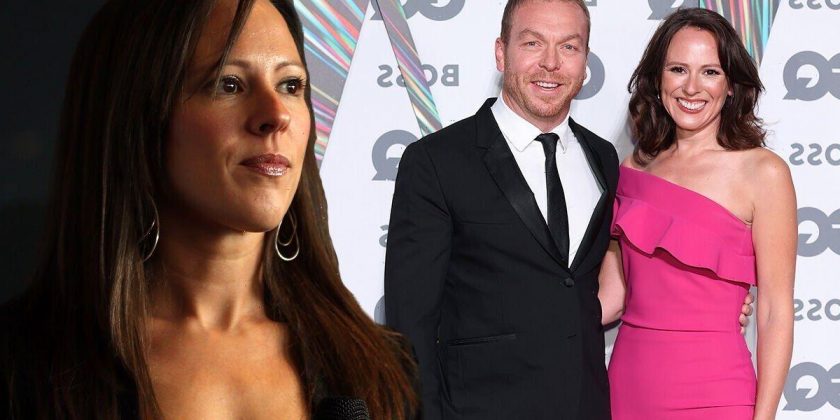 Sir Chris Hoy, 46, shares two children with his wife Lady Sarra, both of whom were born prematurely. In an unearthed interview from the end of last year, the Olympic champion, 46, told how there wasn’t “a day that goes by” that he and his partner didn’t feel “grateful” for their kids, ahead of his appearance on Question of Sport this evening.

The Scottish athlete and his wife opened up about the upsetting ordeal they experienced on World Prematurity Day back in November.

The couple share one son, seven-year-old Callum, and a daughter named Chloe, four.

While both children were born premature, Callum was born a terrifying 11 weeks early, which proved daunting for first-time mum Sarra.

Sarra reflected on her eldest’s birth, which she branded an “alien situation”.

She said: “You’ve gone from being pregnant one day to suddenly your baby is out in the real world in an incubator.

“Instinctively as a mum you want your baby close to you but equally you’re fighting against the idea that this baby should be inside you and that actually nobody should be touching him.

“It’s challenging because they look so frail and their skin is twice as thin as a full-term baby, so the thought of causing him any distress at all is very upsetting,” she admitted.

The couple were given instructions on how to safely touch Callum and change his nappy, despite plenty of wires getting in the way.

This made a huge difference for the pair, who spoke about how important it was for their “bonding process”.

Chris said: “Being able to pick up Callum and change his nappy, and feel you have a practical role to play, rather than just sitting there and hoping and waiting, you can do something.”

However, he admitted that it was a “scary” experience as he didn’t want to accidentally hurt him.

“You feel helpless, but the skin-to-skin contact, the cuddling, is a massive part of starting a journey towards normality,” Chris said.

Countryfile’s Helen Skelton ‘sees no way back’ with husband  [INSIGHT]

After the stress surrounding Callum’s birth Chris admitted that they feared their next child would also be premature.

However, thanks to her brother’s tiny size when he was born, Chloe’s weighing just 4lbs didn’t scare her parents as much as it otherwise would have.

Sharing advice to other parents facing the same difficulties in her interview with The Scottish Daily Express, Sarra pointed out that it’s “ok to find it incredibly hard” and that it “doesn’t mean you’re failing as a parent”.

Seven years on from Sarra’s first premature pregnancy, the couple are “counting their lucky stars” that both children are now happy and healthy.

Chris is a British racing driver and former track cyclist from Scotland who represented Great Britain at the Olympic and World Championships and Scotland at the Commonwealth Games.

Question of Sport airs tonight at 7:30pm on BBC One.