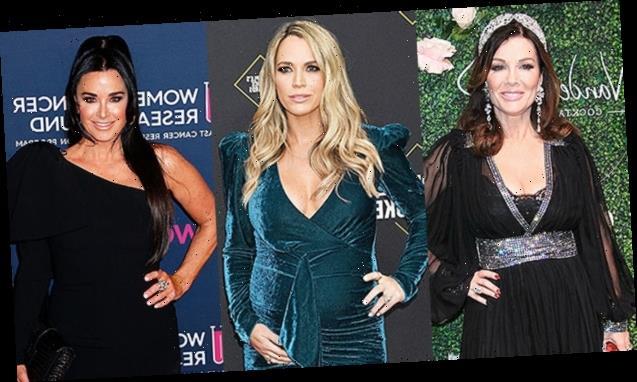 Lisa Vanderpump is not wishing Teddi Mellencamp ‘the best’ as the accountability coach leaves ‘RHOBH.’ Kyle Richards couldn’t relate, though.

Absence doesn’t make the heart grow fonder, apparently. More than a year has passed since Lisa Vanderpump’s drama with Teddi Mellencamp played out on The Real Housewives of Beverly Hills, and the restaurateur still has beef with the accountability coach! LVP made her feelings known now that it was her former co-star’s turn to leave RHOBH, after Teddi confirmed her exit on Sept. 22.

“People said because she was boring. I certainly didn’t have a good experience with her, so boring would be one of the nicer things that I could say,” Lisa said on the Sept. 22 episode of her podcast, All Things Vanderpump. After that burn, Lisa then came after Teddi’s weight loss accountability program, All In by Teddi. The program recently came under fire by anonymous individuals claiming to be former clients, and influencer Emily Gellis Lande shared screenshots of messages from these people that In The Know published (Camille Grammer also called the program “suspect” on Twitter).

“I think there was something of contention about her business. Something about 500 calories a day,” Lisa said, referring to some people who claimed they were eating around 500 calories a day on the program. The Vanderpump Rules star poked fun at these rumors, saying, “I don’t know how anybody can survive on 500 calories a day. I think I eat 500 calories between 2:30 and 4:30 a.m. when I’m up in the night.” However, Teddi responded to the allegations by saying that “nowhere” in the program’s “suggested meal plan does it mention a specific calorie count,” which she clarified in an Instagram video posted on Sept. 16.

“I guess whatever works for you — but apparently it didn’t for everybody,” LVP continued on her podcast. She couldn’t resist throwing a little more shade before ending the topic: “Anyway, wish Teddi Mellencamp all the best… said no one ever. Okay, moving on.” A day after the podcast, Lisa took her shade a step further by replying with a laughing bitmoji face of herself to a tweet that read, “Kyle [Richards] holding auditions to cast a new puppet to be her BFF for RHOBH S11 after getting news that Teddi got axed.”

Kyle was sad to see Teddi leave the series, unlike Lisa. The Bravo star shared throwback photos of her memories with Teddi for an Instagram slideshow and wrote, “To my friend @teddimellencamp who I love & adore. I am so grateful for #RHOBH for bringing you into my life. You are an amazing Mom, wife, sister, daughter & friend. You work so hard, always giving it your all . You are so smart, kind , thoughtful, funny & real. I look forward to witnessing what the universe has in store for you next. I know it’s going to be amazing. You deserve it all. Cheers.”

It’s no surprise to see Kyle on friendlier terms with Teddi than Lisa. In Season 9 of RHOBH, both Teddi and Kyle suspected Lisa of leaking information about PuppyGate to Radar Online, which ran a story claiming  Dorit Kemsley had given away a dog to a shelter, after adopting the pooch from Lisa’s dog foundation.

Dorit later clarified that she had initially given the dog to another home, and the new owners had given the dog to a shelter — not her. Regardless, Lisa repeatedly denied ever giving information about Dorit’s adotpion to the press, but the suspicions even ended her longtime friendship with Kyle. Teddi had called out Lisa for insisting her innocence, despite Teddi herself confessing to playing a role in the PuppyGate scandal that rocked the season.