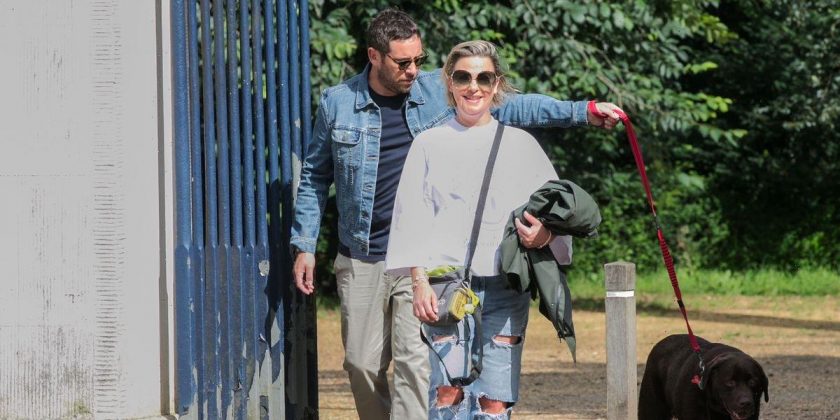 Ant McPartlin's ex-wife Lisa Armstrong smiled widely while on a dog walk with her boyfriend James Green, the day after Ant's wedding to Anne-Marie Corbett.

Makeup artist Lisa, 44, appeared in high spirits as she held hands with her electrician beau James, 38, as she walked her beloved dog Hurley, whom she shares with ex Ant, 45.

Lisa, who took a swipe at Ant on his wedding day, dressed casually in a white T-shirt and baggy, ripped light-blue denim jeans.

She added a dark green long-line coat, which meant she was prepared for the unpredictable August weather.

Makeup artist Lisa covered her eyes with a pair of large sunglasses and had her short blonde locks in a down hairstyle, looking effortlessly stylish.

Lisa looked loved-up as she held hands with James, who looked casual in a pair of light coloured chinos, black T-shirt and denim jacket.

The pair couldn't keep their hands off each other as they bonded while Hurley rolled around on the grass and even took a dip in a pond.

Lisa and Ant bought the pup in 2013. They now have shared custody of Hurley, each having him a week at a time.

Ant beamed as he posed for pictures with his new wife Anne-Marie Corbett. The couple were snapped locking lips outside St Michael’s church in Heckfield, Hampshire.

Lisa did not attend the big day, but liked a number of tweets to share her reaction to her ex-husband remarrying.

Ant and Lisa were married from 2006 until 2018, when Ant announced their decision to split.

The former husband and wife were said to have been in a rift after their split, but reportedly ended their feud for their sake of their dog Hurley earlier this year.

For all the latest news on Lisa Armstrong, Ant McPartlin and much more, sign up to OK! newsletters here.