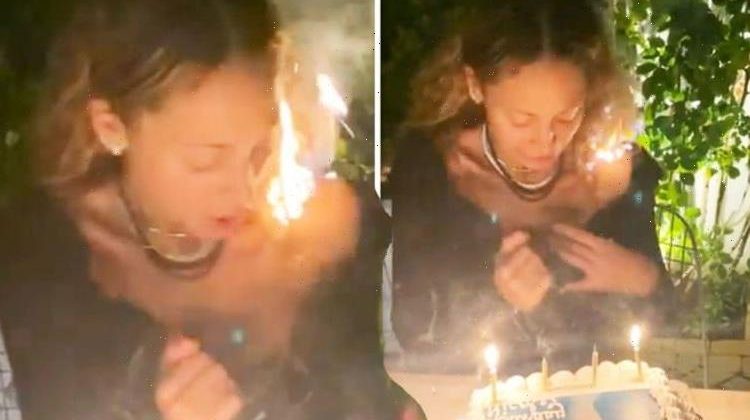 Adele screams as she is hilariously pranked by Nicole Richie

Nicole Richie marked a new milestone as she turned 40 yesterday. But things took a bad turn after her hair caught fire during her birthday celebrations.

Taking to Instagram, Nicole uploaded the shocking moment in view of her 5.2 million followers.

The former Simple Life star was handed a cake by Baby2Baby co-CEO Kelly Sawyer, who placed the sweet treat – together with a shot of Nicole as a child – in front of her as the group sang happy birthday.

The mum-of-two was all smiles after being presented with the baked item.

Unfortunately for the star, terror struck as her hair accidentally set alight as she lent over to blow out the flames.

Cheers could be heard from guests until they saw her blonde tresses in flames.

Nicole, who was sporting a black off-the-shoulder top, immediately jumped back and attempted to fan out the flames.

The video has had over one million views, as Nicole’s celebrity pals shared their horror.

The US TV personality’s comment section was also inundated with birthday messages from her celebrity pals and fans alike.

Nicole, the daughter of musician Lionel, first found fame when she starred with childhood friend Paris in the reality show The Simple Life.

She is the designer of the lifestyle brand House of Harlow 1960, clothing line Winter Kate and a reality TV show judge.

She is married to Good Charlotte rocker Joel.

The mum-of-two tied the knot in December 2010 in a French garden-themed wedding on Lionel’s estate.