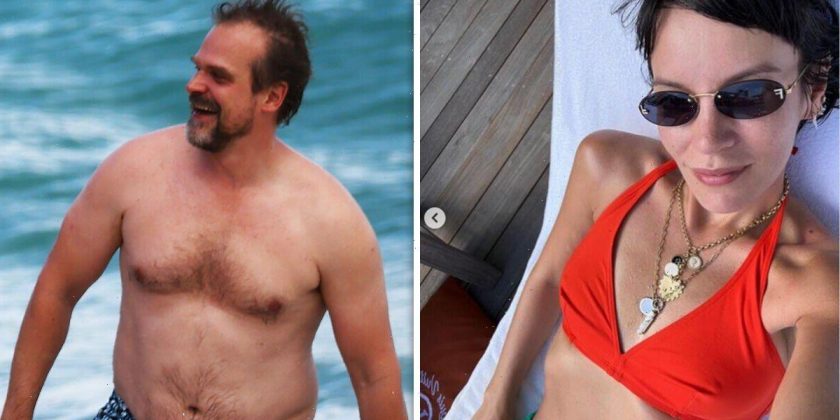 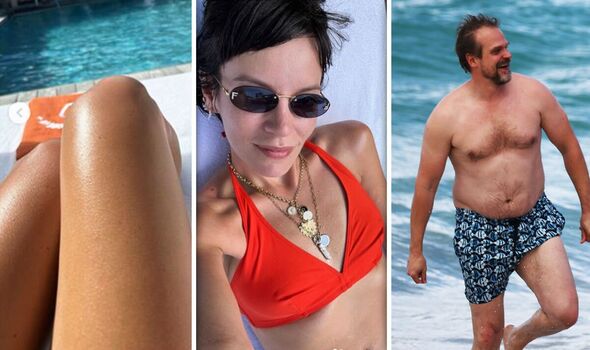 Lily Allen and her husband David Harbour jetted off to St Barts after celebrating Christmas.

The singer lounged on a sunbed in St Barts wearing a red bikini top paired with green bottoms.

Lily added some layered necklaces, dark sunglasses and wore her brunette hair up.

She then shared a shot of her tanned legs while David and the kids could be seen playing in the pool.

In separate snaps taken on Wednesday, David was pictured coming out of the sea before chatting with Lily on a boat.

Lily Allen sunbathed in a red and green bikini

Lily Allen gave fans a glimpse into her sunny holiday as she sunbathed in a bikini which she paired with necklaces and dark sunglasses.

While Lily read books on the sunbed, David Harbour could be seen playing with the singer’s daughter in the pool.

David Harbour was spotted coming out of the sea

Stranger Things star David Harbour was pictured on the beach in St Barts on Wednesday.

David Harbour donned blue shorts with a fish pattern as he took a dip in the sea.

David Harbour rose to worldwide fame thanks to his performance as the chief of police in Stranger Things alongside Winona Ryder and Millie Bobby Brown.

Lily Allen and David Harbour, who married in 2020, were seen on a boat as they explored the Caribbean island of St Barts.

Lily Allen and David Harbour happily chatted while on the boat

Lily Allen and David Harbour first started dating in 2019 and were got married the following year.