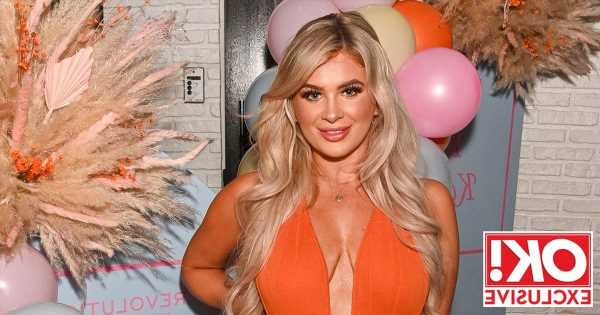 Last year's Love island favourite Liberty Poole has teased the release of a brand new tell-all autobiography, potentially releasing secrets from her time on the show and her ill-fated relationship with on-screen ex Jake Cornish.

Catching up with OK! this week to chat about her potential future endeavours, the 23 year old model and influencer revealed that on her list of goals for the year is to tell "her story".

"I'd love to let people know my story, so I'd be interested in releasing my own book," reality star Liberty tells us, discussing her busy schedule that also includes getting her first mortgage, starting a property business and completing her university degree.

"It’s going to be hard to balance everything, but I think I can do it."

Liberty stole the hearts of the nation last summer when she bravely and unexpectedly called off her arguably one-sided relationship with boyfriend Jake.

But could Liberty be set to reveal the ins-and-outs of her complicated relationship with the former water engineer – of whom she now claims she has "absolutely no contact" with – in her Molly-Mae Hague-esque autobiography?

"I have no issue with Jake," she insists during our interview. "I don’t know if he has a problem. If I ever saw him I’d be civil, but for now, we have no way of getting in touch with one another."

The pair – nicknamed 'Jiberty' made the joint decision to leave the villa ahead of the final after ending their relationship.

They had previously become the series' first official couple after being coupled-up from Day One, however they soon started experiencing bumps in the road after Liberty was shown a video of Jake telling his fellow contestants he didn't want to "rip her clothes off".

Liberty – who has recently collaborated with Skinny Tan and charity Coppafeel for the ‘T*ts and Tanning’ Thursdays campaign which promotes checking your breasts regularly for cancer – has remained close with several of her fellow Islanders since leaving the show, and has hinted she may also be partial to dish the dirt on some of their post-villa antics.

"I’m friends with everyone [from my series]," she explains. "A couple of different girl groups came from my series, so I’ve got Kaz [Kamwi], Faye [Winter], Sharon [Gaffka] and Abigail [Rawlings] on one side, who I see all the time, and then Millie [Court], Lucinda [Strafford] and Chloe [Burrows] are another group that I love spending time with.

"We don’t see each other very often, but we do message all the time to show each other support."