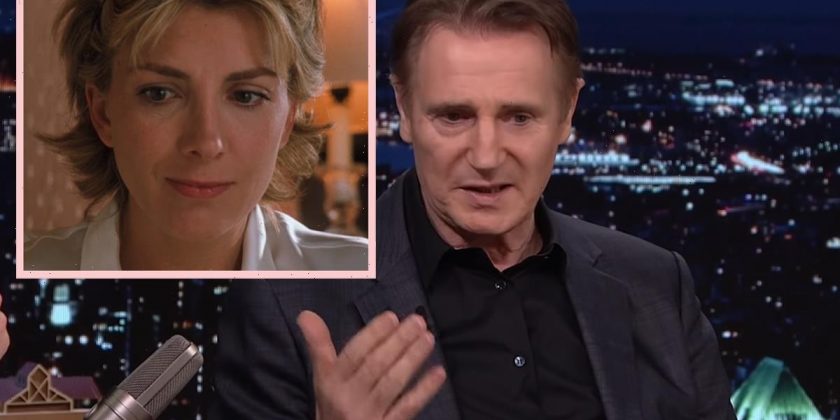 Man, Liam Neeson just can’t help but get TMI in interviews! But at least this is so much nicer than the big guy’s last surprise revelation during a press junket!

The Love Actually star spoke with the Sunrise morning show crew in Australia on Monday about filming his latest film Blacklight. The action flick was filmed Down Under for months back in 2020, so naturally hosts David “Kochie” Koch and Natalie Barr asked what he thought of his time in Oz.

Everything went as expected at first, as the Irishman gushed:

“I loved Melbourne. I loved our Australian crew, they are fantastic workers. Every department was superb. They were their own people, do you know what I mean? They had a great sense of humor.”

But the next statement, just casually tossed off by Liam like it was a throat-punched baddie, was equal parts exciting, confusing, and heartbreaking. He simply added:

“I made a couple of pals… I fell in love, but she was taken.”

Ha! No, we’re pretty sure he means she was unavailable — as in not single, not suddenly abducted off the film set by human traffickers, only to be rescued by a man with a very special set of skills! LOLz!

So wait — he really “fell in love”?? That hits us right in the old feels! And not just because it was destined to be unrequited.

No, there’s also the widower factor. Remember, Liam’s beloved bride, the incredibly talented and beautiful Natasha Richardson died tragically young in a skiing accident in 2009. The Parent Trap star was just 45 years old; she and Liam had been married for 15 years at that point. Since the shocking heartbreak, Liam — a fairly well-known ladies’ man before getting married — has barely dated at all. He dated a British publicist named Freya St. Johnston for about two years back in 2012 but reportedly ended it to spend more time with his children with Natasha, Micheál and Daniel.

So to learn the 68-year-old not only met someone but even used the L word? Wow. Honestly we’re so sad to hear it wasn’t meant to be!

The Sunrise hosts weren’t just taken aback, they were “intrigued” by the revelation! In fact, they told their audience to message in if they knew who the woman was. Not sure that’s the best idea — y’all heard how she’s taken, right?? Even this kind is dangerous.