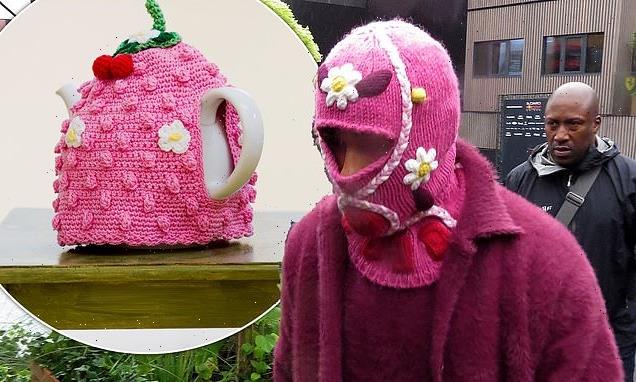 ‘It’s like his nan knitted it for this event!’ F1 fans pour scorn on Lewis Hamilton’s latest look as he steps out resembling a tea cosy in a purple balaclava at the Belgian Grand Prix

Lewis Hamilton conjured images of comfortable Sunday afternoons with the grandparents ahead of the Belgium Grand Prix this weekend, albeit unintentionally.

The fashion conscious Formula One ace bore a striking resemblance to a knitted tea cosy courtesy of his designer balaclava as he surveyed the track at Circuit de Spa-Francorchamps.

Decorated with a distinctive daisy pattern, his headgear – through which only Hamilton’s eyes and nose were visible – inevitably caught the eye during the brief outing. 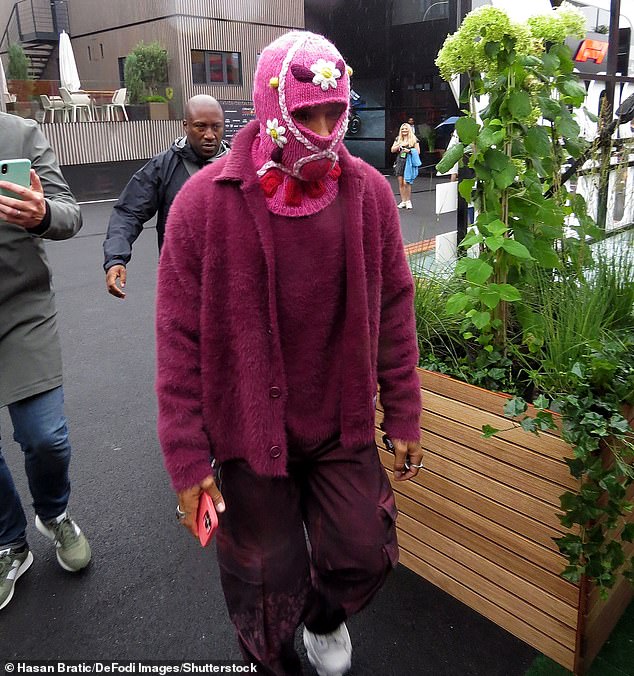 Don’t mind me: Lewis Hamilton conjured images of comfortable Sunday afternoons with the grandparents ahead of the Belgium Grand Prix this weekend, albeit unintentionally

Lewis added to his look with a colour coordinated ensemble, this time opting for a thick purple cardigan, long sleeved top and generously cut cargo pants.

Rounding off the garish look, Lewis sported a pair of rather outlandish white trainers with deep, oversized soles as he prepared for a practice run.

Speechless fans were quick to voice their opinions on social media, with one commenting: ‘It’s like his nan knitted it specifically for this event so he had to promise to wear it.’

A second added: ‘I’m pretty sure he could afford help with the wardrobe.’

While a third wrote: ‘Fashion is… an interesting industry.’

However one impressed fan gave the unusual look a thumbs up, writing: ‘This one looks cute.’ 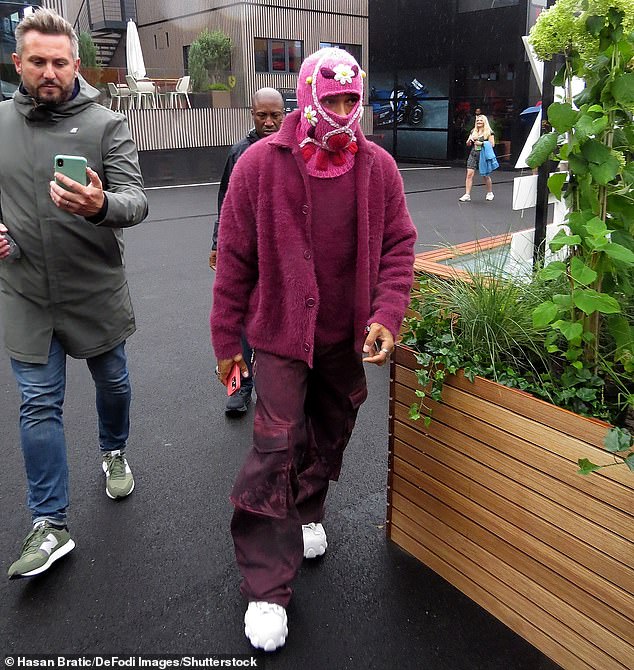 Striking: The fashion conscious Formula One ace bore a resemblance to a knitted tea cosy courtesy of his designer balaclava as he surveyed the track at Circuit de Spa-Francorchamps 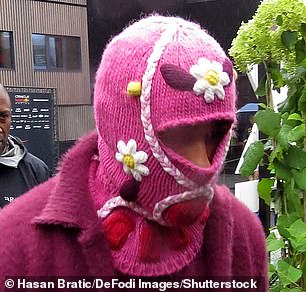 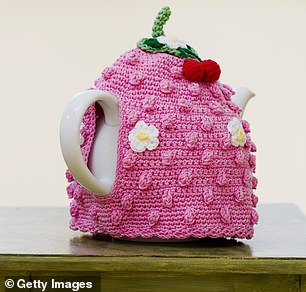 Separated at birth: Lewis Hamilton in Belgium on Saturday (L) and a knitted tea cosy (R) 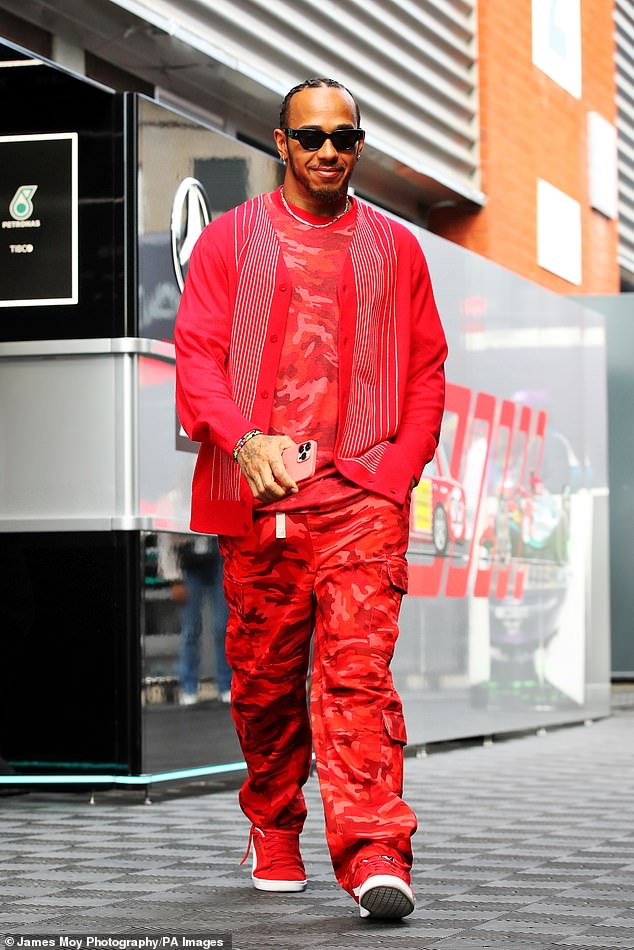 Here we go again: The following day he continued his trend for bright outfits by wearing bright red cameo trousers with a matching T-shirt and cardigan.

The following day he continued his trend for bright outfits by wearing bright red cameo trousers with a matching T-shirt and cardigan.

The star opted for red and white trainers and even coordinated his phone case to the look.

Lewis has won a race every season of his career bar this one. Nine races remain in 2022, including Saturday’s over the slightly re-profiled 4.35-mile Spa track, to maintain that unique record.

He came over the radio to ask: ‘How far off were we?’ The Mercedes man was prepared for some hard analysis, but not quite the bleak fact that was broken to him. ‘1.8 seconds to Verstappen,’ intoned race engineer Peter Bonnington, apologetically.

‘One point eight seconds!’ Hamilton repeated in a drawl of near incredulity. And that was almost certainly the end of his hopes of winning Sunday’s Belgian Grand Prix, dashing what in theory had seemed a realistic scenario with the world championship’s two leading drivers, Red Bull’s Verstappen and Ferrari’s Charles Leclerc, taking engine penalties which drop them down the grid. 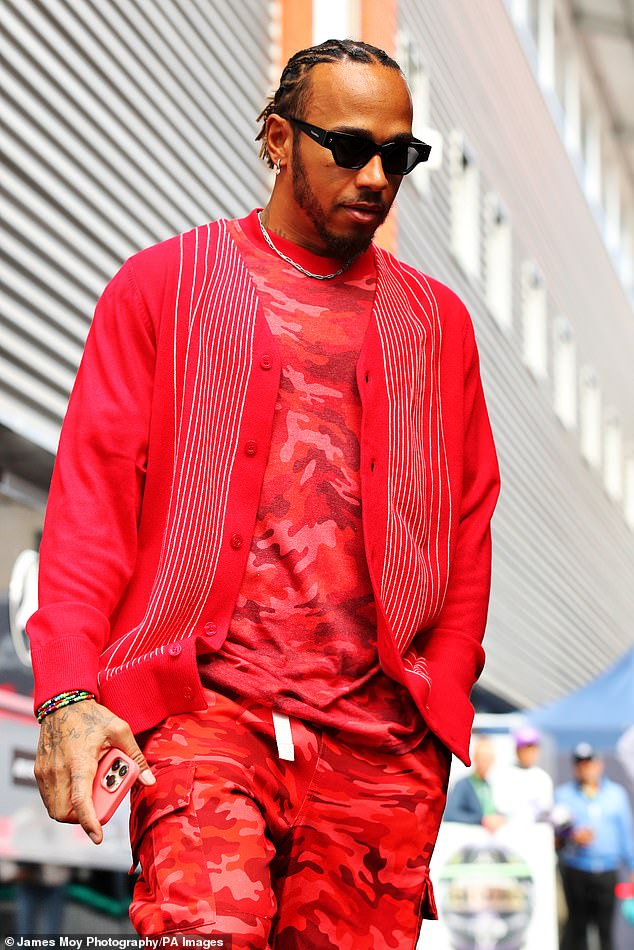 Eye catching: The Formula One star rocked bright cameo trousers with a matching T-shirt and cardigan as he arrived at the Spa-Francorchamps race track in Stavelot, Belgium

Lewis was only seventh best in qualifying and his team-mate George Russell eighth, 2.1sec shy. They will start fourth and fifth once the snakes and ladders of various sanctions are applied.

Verstappen, who took pole sixth-tenths of a second and more ahead of Carlos Sainz, will start 15th and, given the magic carpet on which he sits, is as likely a victor as anyone. Leclerc will start 16th, down from fourth in qualifying. 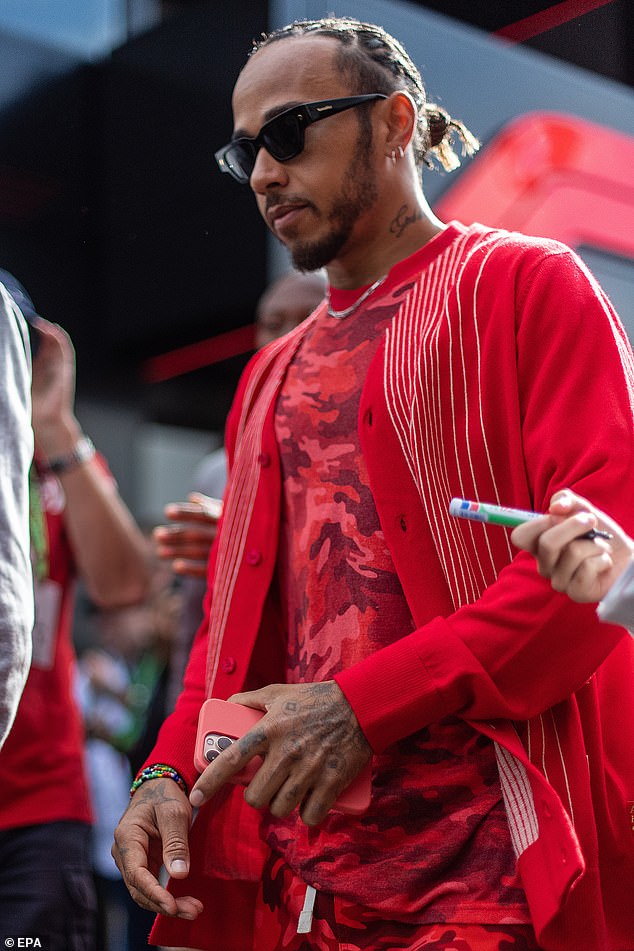 Looking good: The star opted for red and white trainers and even coordinated his phone case to the look

Lewis was lost for answers when he conducted his post-session interviews. One consolation was beating Russell — his first priority. But, that apart, there was nothing to cheer his spirits on this cool, slate-cloud afternoon in the Ardennes forest.

A flight of stairs below in the paddock, Toto Wolff called it the ‘worst qualifying I have had in 10 years.’ ‘Lewis said it is like dragging a parachute behind him,’ the Mercedes team principal said. 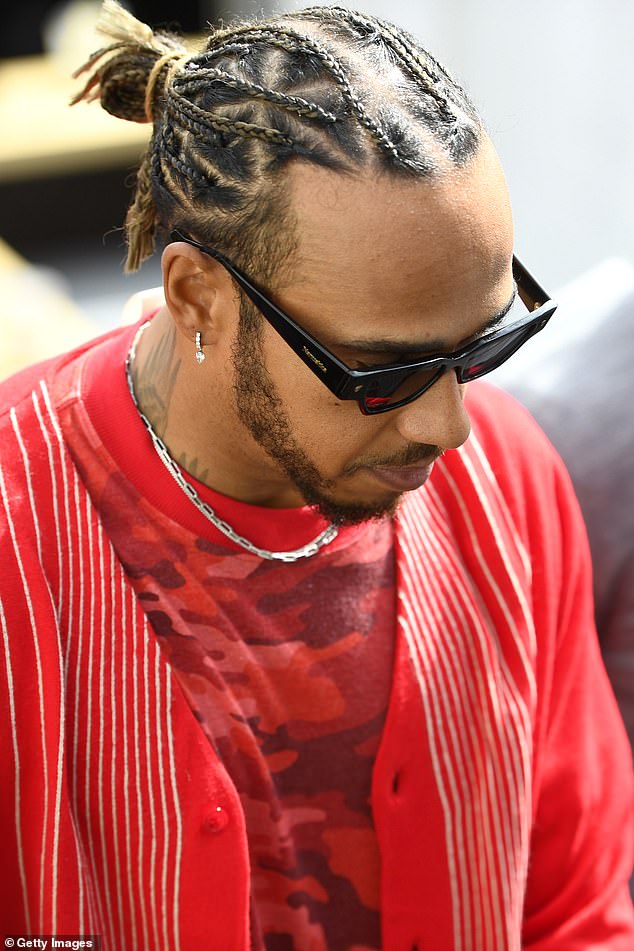 Coordinated: Hamilton accessorised with a number of beaded bracelets as well as a silver necklace

It was all the harder to stomach because prior to the summer break Russell took pole in Hungary.

He and Lewis finished that race in third and second places. Hope was in the air, but that was to discount the sheer rocket-like pace of the Red Bull, as well as Mercedes’ stubborn limitations. They are slow in a straight line and the cooler 15C temperature yesterday hardly helped their cause.

Nor did the FIA’s new technical directive stipulating that the skid block under the monocoque be uniformly 10mm thick help them as some had expected.

‘It is quite straightforward,’ said Lewis. ‘We were just not very fast. I didn’t have a problem with the tyres. It’s the car. It doesn’t make sense. 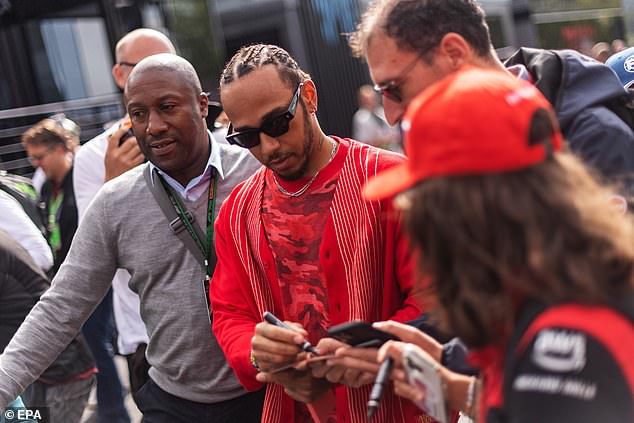 Fans: He seemed relaxed ahead of the race while hiding behind a pair of dark sunglasses and greeting fans

‘I tried everything. I put everything on. I took everything off. I changed wings. I changed set-ups. I did everything this weekend, a lot of things. I never ever thought we would ever be two seconds off, so it is way, way worse than expected today.

‘I don’t want to use the word disappointing because you have to remember about all the people who are working so hard to get it right.

‘Of course, I wish we got it right. I wish we brought the upgrades that pushed us forward and I wished we were fighting at the front. It hurts. Believe me it hurts. But at this point you have to laugh it off.

‘I am not fighting for a championship. I cannot get too serious and too low. I have a responsibility to keep morale high and keep pushing. We can’t be discouraged. Yes, it sucks and it is slow, really slow, but we are starting fourth tomorrow, and we may have a chance to get a podium, who knows. We have to stay optimistic.’ 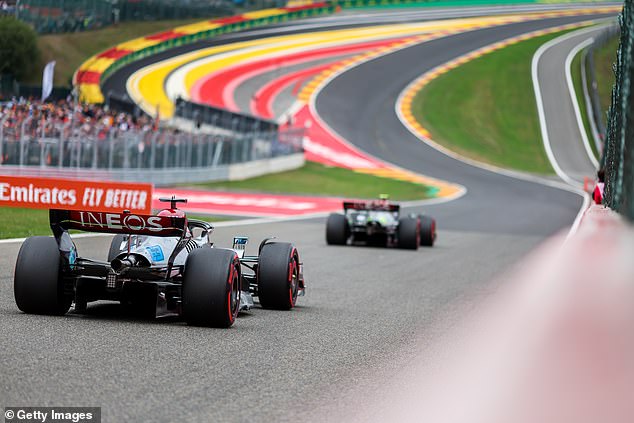 Wow: Lewis Hamilton believed he had a good chance this weekend but qualified only seventh