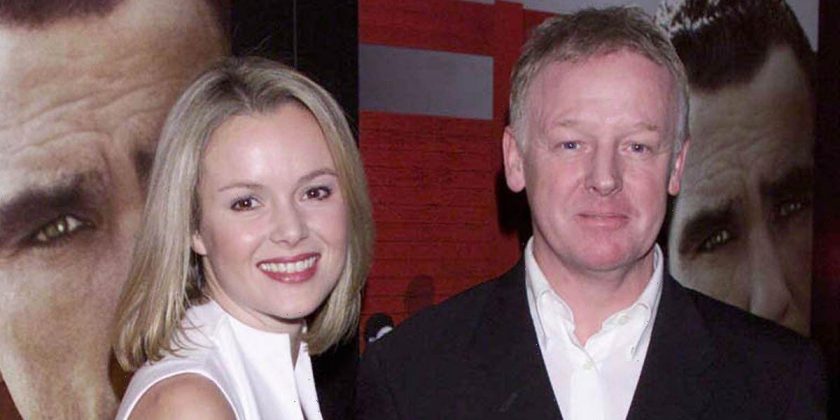 Les Dennis has taken a swipe at his ex-wife Amanda Holden with a joke about her affair with Neil Morrissey.

The 67 year old was married to the blonde bombshell from 1995 to 2003 and their marriage took a heavy turn when news broke of her affair with the actor, 59.

The pair tried to work on their marriage, giving it another shot in 2001, but ultimately ended it and went their separate ways.

Now, former Family Fortune's presenter Les has made a cheeky jibe at the ordeal they went through while talking to Christopher Biggins on his podcast Show and Tell, reminiscing about his panto days with the late American actor Mickey Rooney shortly after his divorce.

Before each show, the theatre would play Christmas songs, including Have Yourself A Merry Little Christmas by Frank Sinatra.

“Mickey would get very angry, because of course, Frank Sinatra ran off with Ava Gardner [Mickey’s wife]," Les explained.

Referencing Neil's previous role voicing Bob from animated children's series Bob The Builder, he then joked: "It would’ve been like me having to listen to Bob The Builder every night.”

Amanda, 50, previously spoke out about the public backlash she experienced following the scandal as she explained: “I found the fall from grace incredibly hard to deal with. I can’t bear not to be liked."

The star, who recently shared a hilarious video of her rarely seen sister Deborah, added: "I had an affair and overnight turned into this awful person."

Amanda threw herself into work, scoring the title role in West End musical Thoroughly Modern Millie and winning herself a Laurence Olivier Award in 2004.

In 2006, Amanda’s career flew even higher when she was cast in a starring role in ITV drama series Wild At Heart, the same year she bagged a coveted judge’s seat on Simon Cowell’s new talent show, Britain’s Got Talent.

Amanda and Chris tied the knot in Somerset in December 2008, but three years later, the couple were hit with heartbreak when their son, Theo, was stillborn at seven months.

The star has been praised for her openness about dealing with PTSD following Theo’s death. “There is not a day that goes by when I don’t think about Theo, especially when a new school year begins,” she said recently.

The couple’s second daughter, Hollie, was born in 2012. Along with raising her girls, Amanda has fronted various series, hosted This Morning and made a return to the stage with stints in Shrek The Musical and Stepping Out.

For all your updates on Amanda Holden, sign up to our daily OK! newsletter.