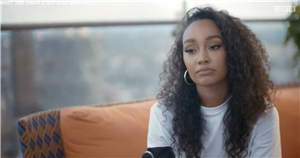 Leigh-Anne Pinnock has been praised for bravely opening up about her experiences as a black woman in the entertainment industry following the release of her brand new documentary, Race, Pop And Power.

In the BBC Three film, Leigh-Anne discussed her nine years in Little Mix and what it was like when the band was formed on The X Factor, saying that things “felt a bit off” and claiming she often felt she was “treated differently” from her bandmates due to her skin colour.

After the doc aired on BBC One on Thursday night, fans rushed to congratulate the 29 year old singer.

One wrote on Twitter: “I am honestly speechless for this beautiful, vulnerable and brutally honest piece of art. Disappointed on how the label isn't ever ready to listen.”

Another said: “It was so powerful and everyone should watch it because change needs to happen even more!”

A third fan was brought to tears by the film and tweeted: “I was in tears, it’s made me want to educate myself more and find ways to support. It’s definitely worth a watch even if you aren’t a little mix fan.”

Another fan, who felt incredibly moved by Leigh-Anne’s documentary, said: “This doc better win an NTA.”

In the BBC Three film, Leigh-Anne wrestled with whether she has felt like the "token black girl" in Little Mix, admitting that she felt her skin colour was being used to “define my image within the group” in the early days.

Leigh-Anne also recalled a handful of other incidents which left her feeling inferior to her four bandmates.

“We did a radio show tour [and when] we got off the plane and there were some fans standing waiting for us," she explained. "I was the first to walk up to them and they just walked past me and went to the other girls.

"For the next decade I was in a pop bubble with all the success I had ever dreamed of. All that matters is that feeling that doesn't go away. It keeps hurting and hurting and wondering ‘is it my colour?’. I just wanted to be on that same level and nothing I did would get me there.”

Leigh-Anne and her bandmates Jesy Nelson, Perrie Edwards and Jade Thirwall were thrust into the spotlight when they became the first ever band to win The X Factor in 2011.

Leigh-Anne’s parents also feature in the documentary as the singer has a heart to heart with them about how her experiences in the spotlight.

Breaking down in tears, she told them: “I was carrying a lot. I never felt good enough. I felt it was ruining my experience which should have been the best time of my life. It's just f**king frustrating.”

Her father replied: “Life is not about having loads of money or this or that, if you're not feeling right in yourself… you're not going to feel right, are you?”

Leigh-Anne also met with Keisha Buchanan from the Sugababes, former X Factor winner Alexandra Burke and bandmate Jade Thirwall, who she spoke with about wanting a nose job.

Leigh-Anne has launched a charity to help black people get into the creative industries.

Leigh-Anne: Race, Pop & Power aired on Thursday and is now available to watch on BBC iPlayer.