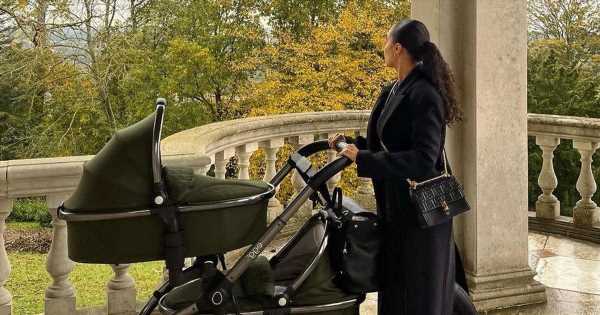 Leigh-Anne Pinnock has shared a rare insight into her life as a new mum in a sweet snap shared on Instagram.

The 30 year old singer shared a couple of pictures on social media on Wednesday 10 November, where she could be seen out and about with her twins.

In one photo, Leigh-Anne was seen looking off into the distance while holding on to her impressive khaki green twin pram.

While you can’t see her face, the singer looked super chic in green and black Nike trainers, leather trousers, and a long black coat.

She coupled her sleek outfit with a slicked back ponytail and what appears to be a Fendi handbag.

In a second picture, Leigh-Anne showed off the delicious-looking afternoon tea she shared with her friend Hannah.

She captioned the photos: “Oh we do love an autumnal setting @hannahlisab beautiful couple of days with the bestie and cubbies”.

It’s unknown where exactly the singer and her friend were, but the location looked undeniably stunning.

Leigh-Anne shared another sneak peek at her gorgeous newborn babiesin a video compilation that was created for her 30th birthday.

In the video, the singer’s seen saying goodbye to her twin babies before heading to her first post-baby night out as she leans over one of their beds.

Her fiancé Andre Gray is then seen cradling one of their children, as Leigh-Anne says: "The bubbas are in good hands. They've got their milk supply so, yeah, mama's going to have some fun."

Leigh-Anne is yet to reveal the names of her children and it doesn’t appear as if that’s going to change anytime soon.

Meanwhile, fellow bandmate Perrie Edwards has revealed the gender and name of her baby boy Axel, whom she gave birth to on 21 August.

Both Perrie and Leigh-Anne appear to have bonded over motherhood after they became mums for the first time just days apart from each other.

Discussing how hectic life’s become, Perrie said during the zoom with The Telegraph: “There’s no such thing as having a scheduled lifestyle any more.”

Leigh-Anne agreed, saying: “Like you say, Pez, you can’t plan anything. Even when you want to feed them at a certain time, it never goes to plan.”

For updates on all your favourite celebs, sign up to our daily newsletter here .