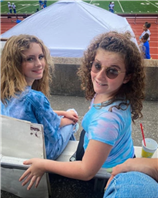 Leah Messer has always been one of the more divisive Teen Moms.

For the most part, viewers love her tale of redemption, and they continue to applaud Leah for getting sober, getting her kids back, and generally turning her life around.

But there are those who believe that Leah still has a lot of growing up to do, and they’d like to see her accomplish that before her kids go off to college.

In recent weeks, Messer’s critics have been having a field day, with many accusing her of failing to provide a stable environment for her kids.

Many feel that Leah is rushing her relationship, and she should not have introduced her kids to Mobley so soon after meeting him herself.

Yes, these days the criticism of Leah mostly centers around her alleged inability to offer a stable home life to her three daughters.

And a recent photo of the kids has earned Leah some of the harshest rebukes of her career.

The pic above was taken at a high school football game earlier this week, and when it popped up in Leah’s Instagram Stories, many TM2 viewers took ro Reddit to offer their two cents.

“I had to zoom in are those fake lashes?” one commenter asked.

“Makeup is fine and everything but could we ease up on it a little bit?” a third chimed in.

As you can see, the criticism was focused entirely on 11-year-old Aleeah’s look, which many fans seem to think is a bit too grownup.

It’s no okay to criticize a child on social media, but to be fair, most of the comments focused less on Aleeah’s appearance and more on Leah’s willingness to let Leah sport makeup and false eyelashes at such a young age.

“She doesn’t really need to go that heavy-handed on it does she? It is daytime after all,” one redditor wrote.

“I Feel Like She Be Having Them Grow A Lil Too Fast,” yet another added.

“Not feeling all that makeup on a little girl’s face,” one user remarked, seemingly echoing the feelings of the entire subreddit.

Leah has yet to respond to any of this criticism, and it seems unlikely that she ever will.

She obviously lets her kids make their own decision with regard to their appearance, as evidenced by the fact that Aleeah’s twin sister Ali is not copying Aleeah’s look.

Obviously, there’s nothing wrong with that, and Leah and her daughters should be allowed to reach a consensus on such matters without any unsolicited input from outsiders.

But it’s times like this when Leah might do well to remind herself that she has 2.5 million Instagram followers, many of whiom have no qualms about voicing their harshest criticisms.

Leah is probably used to the rude comments at this point in her career, but her kids have developed no such emotional callous, and they’re old enough now to google their own names.