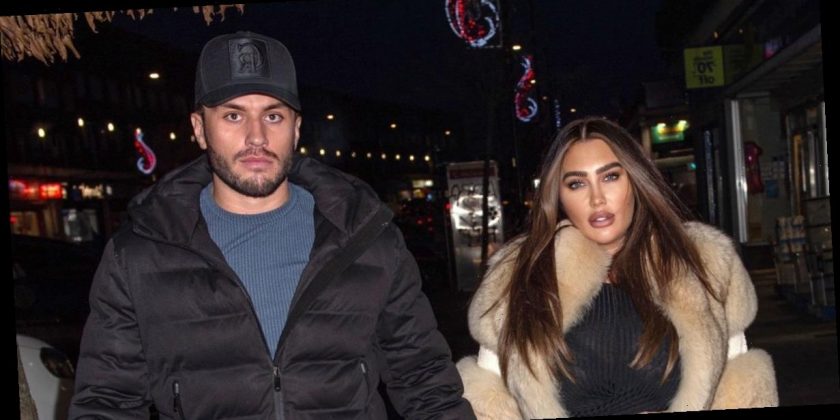 Lauren Goodger has been spotted stepping out with her boyfriend Charles Drury, after she was branded a “halfwit” by Piers Morgan in a savage takedown.

Former The Only Way Is Essex star Lauren, 34, stepped out in a beige furry jacket along with a black crop top and figure hugging trousers.

Lauren carried a black quilted handbag with her, which had a silver chain for the handle as she was snapped out in Essex on Monday 11 January.

Reality star Lauren had a full face of makeup on, complete with bronzer, nice lipstick and a matching eyeshadow on her eyelids.

Meanwhile, she wore her lengthy brunette locks in a straight down hairstyle with a middle parting.

Lauren wore a pair of black Balenciaga slip-on trainers on her feet as she walked down the street hand-in-hand with her electrician beau Charles Drury, who she reportedly moved into her Essex home three weeks after confirming their romance.

Charles wore a blue top with matching jogging bottoms and added a black puffer coat, black cap and trainers of the same colour for his outing with Lauren.

The 23 year old clutched on to a grey and black Louis Vuitton bas as he made his way with his girlfriend, who both have straight expressions on their faces.

The appearance comes after Lauren was savagely slammed by Piers Morgan after she refused to take the coronavirus vaccine.

During Wednesday 6 January’s episode of Good Morning Britain, Piers said: “On the day we discovered a million people have the virus and we’re desperate for a vaccination, she said she doesn’t agree with masks and won’t be taking the vaccine if it’s given to her.

“She said she’s terrified of the vaccine and believes she’s already had Covid and she didn’t die so it’s not a problem.

“Lauren said: ‘I’m more scared of the vaccine than I am the virus’… really?”

He continued: “She said: ‘I don’t like taking medicine, I won’t take antibiotics but I do do aesthetics’… what?”

Piers, who’s son spencer recently ignored Tier 4 restrictions in London to fly to Barbados, then went on to rip into Lauren as he said: “Here’s a picture of Lauren. What do you think she’s been shoving in her face?

“Where does that come from Lauren? What have you been injecting in those lips? Have you checked where it came from? Checked what it is?”

An infuriated Piers continued: “I mean these people are absolute halfwits… they’re not even halfwits, they’re quarter-wits!”