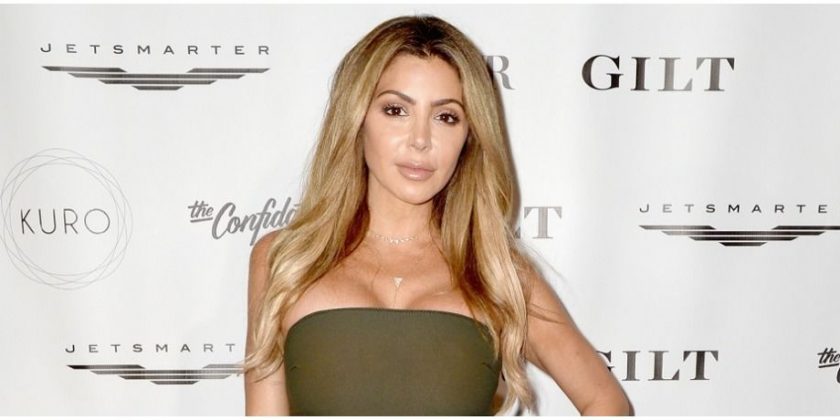 Larsa Pippen is showing off her hourglass figure in her latest social media video.

On Thursday, Dec. 27, Larsa Pippen took to her Instagram account to share a brand new video of herself sporting a barely-there black dress, and showcasing all of her assets.

In the video, Pippen is seen wearing a skimpy black leather dress. The gown hugs all of the former Real Housewives star’s curves, and as she puts on a busty show by flaunting her cleavage in the clip.

Larsa shows off her curves in the video before panning up to her face. Kourtney and Kim Kardashian’s bestie is seen wearing a diamond choker that says “QUEEN” on it, as well as sporting a full face of make up, including smokey eyes, dark lashes and brows, a bronzed glow to her skin, and pink lips. She also adds highlighter for some shimmer.

Pippen’s long, caramel-colored hair is parted down the middle and styled is soft waves, which fall down her back and over her shoulder. Larsa tousles her hair as she gives a sultry pose for the camera in the clip. Some rap music is heard in the background, and the reality star reveals that she’s in her “element” in the caption.

According to Cosmopolitan, Larsa Pippen is originally from Chicago, where she attended the University of Illinois. She graduated from the school with a degree in political science, and now operates her own website called Life with Larsa, which focuses on beauty, fashion, and lifestyle.

Larsa is estranged wife of NBA legend, Scottie Pippen. The couple married back in 1997, but announced their plans to divorce after 21 years of marriage earlier this year.

“Ppl are so insensitive to my life. I’m a lover and will never say anything negative about him. My soul isn’t built for negativity. I’ll take a beating publicly ppl saying I cheated when believe me it wasn’t like that. He was no where around. I cried oceans after him. I would do anything for him,” Larsa said on social media of Scottie following their split.

Larsa and Scottie share four children together, three sons and one daughter. She is often seen hanging with Kourtney and Kim Kardashian and has made multiple appearances on Keeping Up With the Kardashians.

Kim and Larsa have been friends for many years, and back in 2014 Kim opened up in a blog post about how much her friendship with Larsa has meant to her, revealing that she always calls Pippen when she needs some parenting advice.