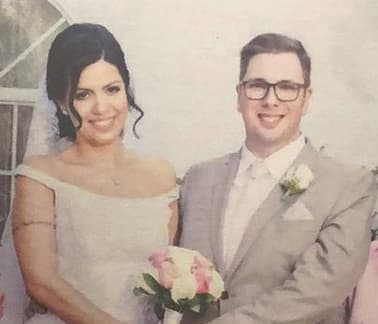 On Wednesday, we reported that 90 Day Fiance star Larissa Dos Santos Lima is not going to prison for domestic battery.

But that doesn’t mean that things are all good between her and her husband, Colt Johnson.

In the wee hours of Thursday morning, Larissa accused Colt of continuing to flirt with other women. And she brought out the receipts.

“I’m taking a break of internet,” Larissa writes in a now-deleted Instagram post before sunrise on Thursday.

“Truly hurt me,” she explains. “Seen my husband flirting online.”

(English is not Larissa’s native language, but her meaning is clear — she find it emotionally hurtful when Coltee allegedly flirts)

Her caption was beside a wedding photo in which Deb, her mother in law, has been very conspicuously cropped out.

The post is no longer with us, but you can see it here:

Early this morning, I took a screenshot of this post just in case it was deleted — which seemed pretty likely at the time.

She explains that she is, contrary to some of her statements on 90 Day Fiance, just fine with modest living.

As far as being a good wife, Larissa writes: “I always cleaned his house took care of him.”

(Can we just say that no spouse should be doing all of the housework? If you want to do zero housework, hire someone to clean)

“I can’t keeping posting my personal life online,” she says.

“I just wished that he woke up,” she concludes. “And these women stop to message him.”

Maybe it would have been better if Colt and Larissa had spoken to each other about this before anyone posted anything on social media.

That was not all that Larissa had to say on social media.

She also sent out a screencap of where she called out a woman who has allegedly been sending flirtatious images to Colt.

That’s pretty confrontational — and also not proof that Colt has been disloyal to Larissa.

“Nobody believe when I said he still flirting online,” she lamented.

“Last night,” Larissa claimed. “I found two pictures of one girl that he was texting.”

She then explained how she had found them through his Dropbox.

“It’s sad because, when he was alone, I was there for him,” Larissa wrote.

“Now he doesn’t care anymore,” she says. “Because he has options.”

“Now,” Larissa claims. “He thinks that he can get something better.”

“And now that I was used to ‘living with mother in law experience,'” she continues.

“He wants someone new that he will handle better,” Larissa concludes.

Does the deletion of her earlier post mean that all is good?

Or are these two prepared to split? Only time will tell.

They would certainly not be the first 90 Day Fiance couple to make it all the way to the altar only to get a divorce later.

90 Day Fiance Couples: Are They Still Together?