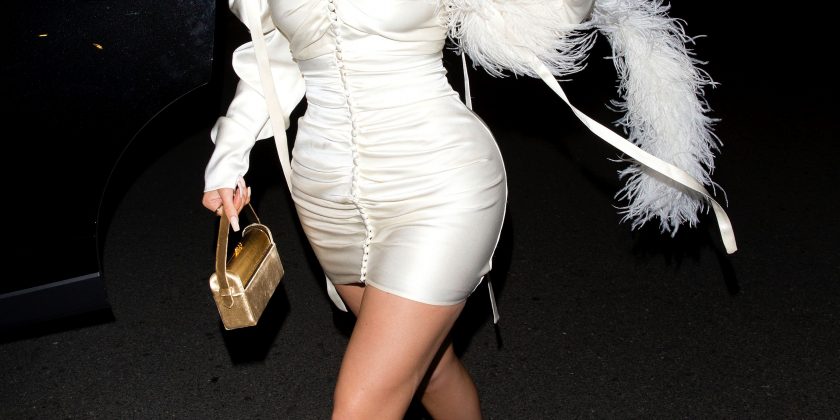 Kylie Jenner rocks a festive look for the season in Los Angeles on Saturday.

Angela Bassett — who famously played Tina Turner in the 1993 film What’s Love Got to Do with It — links up with Tina: The Tina Turner Musical star Adrienne Warren backstage at London’s Aldwych Theatre on Friday.

Amid her reunion with Offset, Cardi B performs at the Electric Holiday Concert at the Puerto Rico Convention Center in San Juan on Friday.

Luke Wilson flashes his grin while out and about in L.A. on Friday.

Johnny Depp, guitar in hand, arrives in Paris on Friday after taking the train from London.

Amanda Bynes keeps her eye on her phone during an outing in Los Angeles on Friday.

Newlyweds Priyanka Chopra and Nick Jonas smile together at their latest wedding reception in Mumbai on Thursday.

Ellie Goulding performs a charity concert at the SSE Arena Wembley in London on Thursday.

Mark Ronson, Mikey Cyrus and host Jimmy Fallon sip some eggnog after Miley sings a feminist version of “Santa Baby” on Thursday’s episode of The Tonight Show in N.Y.C.

Thursday in N.Y.C., Steve Carell stops by the 92nd Street Y to discuss Welcome to Marwen after the film’s screening.

Jennifer Lawrence looks chic in a yellow Burberry teddy coat as she heads to a salon in N.Y.C. on Wednesday.

Kate del Castillo holds up a shot glass at a press conference at Club 51 in Mexico City on Thursday.

Queer Eye’s Jonathan Van Ness turns the sidewalk into a runway on Thursday in L.A.

RuPaul turns and smiles for the camera on Thursday’s episode of The Late Late Show with James Corden in L.A.

Dakota Johnson picks up some gift wrap on Thursday while walking around L.A.

Jennifer Lopez joins Alex Rodriguez in Malibu while he finishes shooting a commercial on Thursday.

Donnie Wahlberg poses with arms wide open on the set of Blue Bloods on Thursday in N.Y.C.

Lindsay Lohan is seen out and about in a white puffer coat on a rainy day in N.Y.C.’s SoHo neighborhood on Thursday.

Dua Lipa performs at the Ellie Goulding for Streets of London charity gig at the SSE Arena Wembley in London on Thursday.

Jake Gyllenhaal and Amy Adams keep it neutral on Thursday for a special reception for her film Vice in N.Y.C.

T.I. spreads some holiday cheer in Atlanta, popping into various charity organizations with presents on Thursday on behalf of his Harris Community Works foundation.

Gisele Bündchen celebrates the launch of her campaign for the Vivara jewelry brand in São Paulo, Brazil, on Wednesday.

Michelle Obama talks about her book Becoming with Sarah Jessica Parker at Barclays Center in Brooklyn, New York, on Wednesday.

Jennifer Garner is spotted out in Los Angeles on Wednesday.

Paris Hilton and Jenny McCarthy twin in Santa hats and black sunnies while chatting about Hilton’s new Netflix documentary The American Meme on The Jenny McCarthy Show at SiriusXM studios on Wednesday in N.Y.C.

Winston Duke arrives at an MCM X GQ celebration in his honor on Wednesday in Beverly Hills.

Joe Biden meets star Jeff Daniels backstage at the Broadway production of To Kill a Mockingbird on Wednesday.

Luann de Lesseps gets into the holiday spirit during her Holiday Cabaret Show at Gramercy Theater in N.Y.C. on Wednesday.

BlackkKlansman costars Adam Driver and John David Washington embrace at a Wednesday screening of the film in N.Y.C.

Willem Dafoe speaks at a Variety screening of At Eternity’s Gate on Wednesday in L.A.

Hailee Steinfeld waves to the crowd during Wednesday’s episode of The Tonight Show Starring Jimmy Fallon in N.Y.C.

Hailey Baldwin pairs a blue blazer with blue boots for a coffee run in Beverly Hills on Wednesday.

Billy Joel’s 3-year-old daughter Della Rose melts hearts as she adorably joins her dad onstage at New York City’s Madison Square Garden on Wednesday to perform a duet of her favorite song, “Don’t Ask Me Why.”

Ben Stiller layers up as he arrives at Jimmy Kimmel Live on Wednesday in Los Angeles.

David Blaine shows off some of his signature moves during a USO visit to Tyndall Air Force Base near Panama City, Florida, to boost morale of the airmen stationed there post-Hurricane Michael.

Ryan Reynolds is seen out and about in New York City on Wednesday.

Newlyweds Priyanka Chopra and Nick Jonas hold hands at a wedding reception in their honor in Mumbai on Wednesday.

Kobe Bryant surprises students in Mission Viejo, California, on Wednesday as their teacher reveals new curriculum based on his Granity Studios’ podcast The Punies.

Host Héctor Sandarti chats with Lin-Manuel Miranda about Mary Poppins Returns on the set of Un Nuevo Día in Miami on Wednesday.

Jimmy Fallon and Michelle Obama do the sprinkler on Tuesday during an ‘Elevator Surprise’ segment on The Tonight Show in N.Y.C.

Jason Momoa brings his energy to a screening of Aquaman in Sydney, Australia, on Wednesday.

Lin-Manuel Miranda shows off his moves on Tuesday during a sketch on The Late Late Show with James Corden in L.A.

A festive Lori Loughlin does some last-minute holiday shopping on Tuesday in L.A.

Harrison Ford pounds the pavement on Tuesday in L.A.

Laura Harrier shows off some sleek winter style during a Tuesday shopping trip in N.Y.C.

Dave Grohl of the Foo Fighters makes quite the entrance at Jimmy Kimmel Live in L.A. on Tuesday.

Laetitia Casta and Lily-Rose Depp continue promotions for their film A Faithful Man in Paris on Tuesday.

Eiza Gonzalez arrives in style to Jimmy Kimmel Live on Tuesday in L.A.

Whitney Port and son Sonny attend Biossance’s Miracle on Melrose event at the Melrose Farmer’s Market on Sunday in L.A.

Hailee Steinfeld goes monochromatic on Tuesday during a visit to Build Studio in N.Y.C. to talk up her new film, Bumblebee.

Jennifer Garner refuels on Tuesday during a walk around Los Angeles.

Princess Eugenie gives a big grin on Tuesday at the London premiere of Sharkwater Extinction.

Kimiko Glenn greets fans on Tuesday outside of Build Studio in N.Y.C.

Katie Holmes grabs dinner in N.Y.C. with beau Jamie Foxx on Tuesday in celebration of her 40th birthday.

Emily Blunt and costar Lin-Manuel Miranda pose together at the Mary Poppins Returns screening hosted by The Cinema Society on Monday in N.Y.C.

Saoirse Ronan gets silly with host Seth Meyers during Monday’s episode of Late Night in N.Y.C.

Shania Twain belts it out during her Now tour stop at Spark Arena on Tuesday in Auckland, New Zealand.

Orlando Bloom takes his pup for a walk in downtown N.Y.C. on Monday.

Jason Momoa poses on the blue carpet at the Australian premiere of Aquaman in Queensland’s Gold Coast on Tuesday.

Patrick Wilson snaps a selfie with fans dressed up as superheroes at the Aquaman exclusive blue carpet fan screening at Scotiabank Theatre in Toronto on Monday.

Newlywed Nick Jonas gets ready for winter with a shopping trip to Burton in N.Y.C. on Monday.

Host Samantha Bee performs with the Abolish I.C.E. Skaters during her Full Frontal “Christmas On I.C.E.” episode on Monday in N.Y.C.

Yalitza Aparicio stuns in a pale blue dress at the premiere of Roma on Tuesday in Mexico City.

Monday in N.Y.C., Lucas Hedges gets a sweet smooch from a mystery date during the Phoenix Suns vs. New York Knicks basketball game at Madison Square Garden.

Katie Holmes looks chic in a double-breasted jacket and jeans while out and about in N.Y.C. on Monday morning.

Ariel Winter is seen walking in jeans and white sneakers in Los Angeles on Monday.