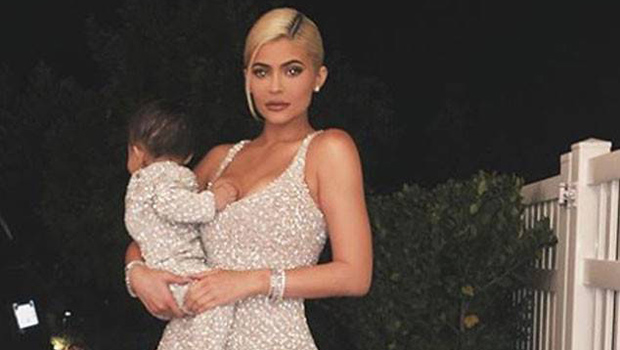 Kylie Jenner took to her Instagram story on Dec. 25 to reveal the reason why she had to leave her family’s annual Christmas Eve party early and why she feels it was the best holiday ever.

Kylie Jenner, 21, proved she loves being a mom when she took to Instagram to share a photo of herself holding her 10-month-old daughter Stormi on Christmas Eve as they were leaving their family’s annual holiday party, which was held at Kim Kardashian and Kanye West‘s L.A. area home, early. The blonde beauty used her caption for the pic to reveal that taking care of Stormi is exactly the reason she had to leave the festivities earlier than usual but she didn’t seem to mind one bit!

“This is me leaving the party early to go give my baby a bath (while wearing this dress because I couldn’t get it off by myself) and put her to sleep and it was the best xmas eve yet,” Kylie captioned the adorable pic. The makeup mogul wore a stunning silver sequined dress for the “Winter Wonderland Whoville” party and little Stormi, whose father is Kylie’s boyfriend Travis Scott, 26, matched her in her own silver sequined pantsuit.

The mother-daughter duo have matched outfits on more than occasion over the past few months. From eye-catching Halloween costumes to casual t-shirts, it’s clear to see that Kylie loves showing off her mini-me in the cutest ways possible. Kylie’s older sis Khloe Kardashian, 34, is another new mom who loves to dress in matching outfits with her eight-month-old daughter True Thompson, and they looked equally as cute as Kylie and Stormi in matching white Christmas outfits for the annual Christmas Eve party.

It’s hard to believe Stormi will turn one-year-old in Feb. and although the days since her birth have seemed to go by so quickly, we’re glad to know Kylie’s ending the year with some great parties and even greater wardrobe choices!