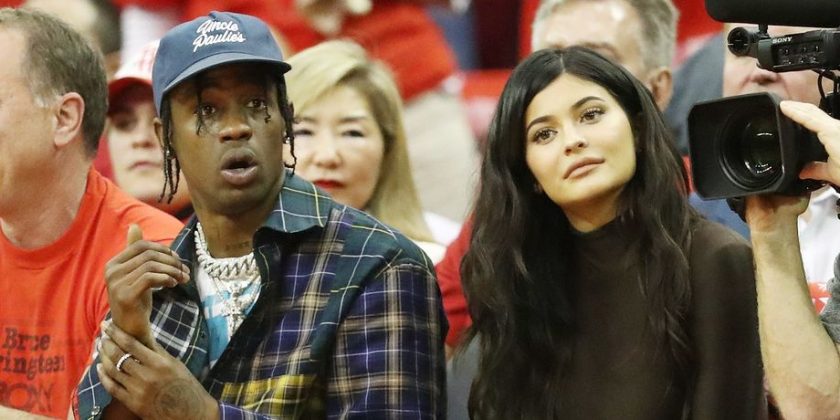 Kylie Jenner continues to show her support for her boyfriend and father of her child Travis Scott as she attends yet another show of his seemingly endless and sold-out tour.

The Keeping Up With The Kardashians star posted a gorgeous picture of herself wearing an oversize pinstripe suit jacket and holding a red glass while enjoying the rapper’s super energetic performance on Thursday. Kylie looked proud while Travis put on an explosive show that has made him one of the most sought-after hip hop artists of his generation. She also took to her Instagram stories to document the night, and by her side was her BFF Jordyn Woods, who the day before had been the chosen one to ride Travis’s crazy onstage carousel, which Kylie already got to do earlier on in the tour. “F**k it! No questions asked,” Jordyn captioned a video of herself going for a spin on the ride.

The two besties danced and sang the lyrics to hit songs such as “Goosebumps” and “Sickomode,” the hit tune that actually got Travis in trouble with his mentor and soon-to-be brother-in-law Kanye West, as the latter claimed Travis allowed Drake to use his verse on the song to “sneak diss” him. However, the two have patched things up, and Kanye and his wife, Kylie’s sister Kim Kardashian, were also in attendance during Travis’s Los Angeles show on Wednesday night.

After a long tour, which Travis has recently extended, it seems like Kylie is back at her L.A. home for the holidays, as she posted a few photos and videos of herself chilling by the Christmas tree, and cuddling up to her two adorable dogs, who looked super excited to see her. And while she told her 122 million Instagram followers just a few days ago that 2018 had been the “best year” of her life, mostly due to her 10-month-old baby daughter Stormi, she has all the more reason to smile now that a new Travis Scott interview with Rolling Stone came out.

In the interview, Travis gushed extensively about Kylie and called her “the one,” and even revealed that the couple will be “married soon.” As previously reported by the Inquisitr, the 21-year-old was so touched by her baby father’s words that she even teared up.

just thinking about how much i love each and every one of you. thank you for all the love and support this year. 2018 has been unforgettable thanks to you.. and having Stormi of course has made it the best. i can’t wait for 2019????

“Kylie cried happy tears when she read the interview, she was so touched by his sweet words. Of course, when he does pop the question she’ll say yes, she can’t wait. Kylie knows the proposal is coming, she just has no idea when, where or how which makes it really exciting,” a source said.