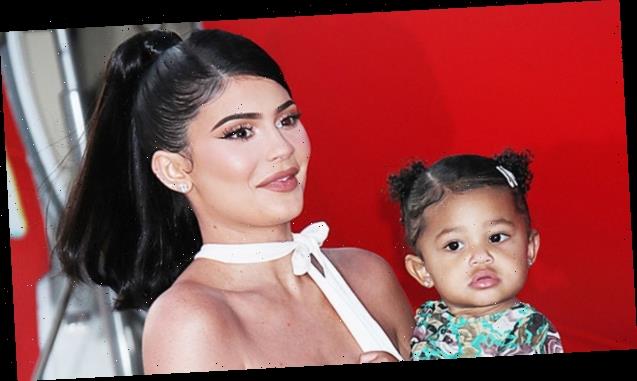 Stormi Webster can’t drive, but her name is on a car that’s worth more than a house. Kylie Jenner combined her two loves, revealing she had her daughter’s name engraved on her beloved Rolls Royce.

Kylie Jenner didn’t caption the shot she uploaded to her Instagram on July 15, but she didn’t need to. In one of the biggest low-key flexes of the year (besides giving two-year-old Stormi Webster a $1,000 Louis Vuitton bag) Kylie, 22, revealed that she had her daughter’s name engraved on her custom Rolls Royce. “Stormi’s Mom” read the words underneath the luxury car brand’s logo, right above the line that said it was a “special build.” Considering all the cars Kylie has, this could likely be her custom Rolls Royce Wraith, with the base model valued at around $320,000.

Judging by the interior, this is Kylie’s black Rolls Royce Wraith. She owns a couple of those cars, most notably the ice-blue one she got in 2018. “You guys, my first custom car,” she said in an Instagram story, per W Magazine, adding that she “waited months for it. “I always wanted an ice baby blue Wraith. Wooow, I’m obsessed. Thank you so much, Rolls-Royce.” Since then, Kylie has grown her collection of luxury cars. She’s filled her Instagram with pictures of her posing in front a many differently colored Wraiths (though, it’s unclear if these are separate cars or the same custom whip with a new coat of paint.)

Along with her Wraiths, Kylie’s garage boasts a $450k Rolls Royce Phantom, a $127k Mercedes G-Wagon, a $1.4M Ferrari LaFerrari, a Ferrari 458 Italia, a Lamborghini Aventador SV, a Mercedes Maybach, a couple of Range Rovers, and a Ferrari 488 Spider. She also displayed a $3M Bugatti Chiron in Oct. 2019, though fans complained that she was bragging too much about her wealth while there were people “out there who can’t eat.”

Like her mother, Kylie and Travis Scott’s daughter has her own garage full of luxury cars. Granted, they’re toys, but probably cost more than the rent of a Bushwick apartment. Stormi showed off these whips in June, posing alongside her mini Mercedes G-Wagon, a precious pink toy Lamborghini Aventador, and her Frozen-themed scooter. In the video of Stormi zooming around on this motorbike, Kylie’s Rolls could be seen in the background.

It won’t be long before Stormi has her own garage of expensive cars. She’ll join the number of celebs with expensive rides, including Drake’s multi-million dollar Ferrari LaFerarri, Kanye West’s $750k Lamborghini Aventador LP 700-4, and the number of classic cars in Harry Styles’s garage.