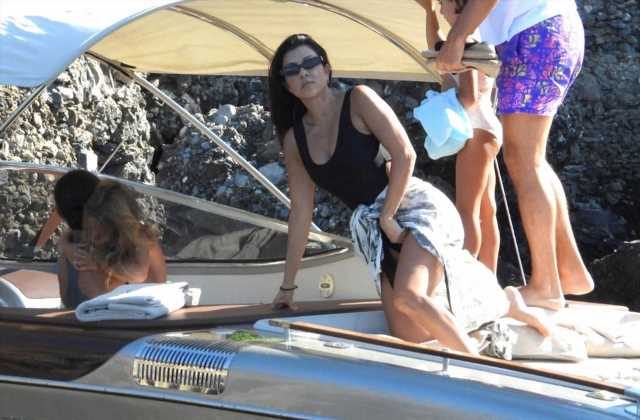 Kourtney Kardashian has spent most of her summer on lavash vacations in Europe, but RadarOnline.com has learned her luxurious lifestyle has left a hole in her bank account!

“Between the private air travel, security bills, five-star lodgings and shopping splurges, Kourt’s spent a fortune,” an insider told Radar. “And she’s made it even more expensive by paying for her team of hangers-on!”

The insider claimed the tab for this summer will be around $1 million in total!

“There aren’t so many freebies flying around for the family these days,” the source said. “Those are generally scooped up by Kris and the other girls.”

Earlier this month, she was spotted in Portofino, Italy with her children Mason, Penelope and Reign Disick, as well as a few of her other friends. Her Portofino ventures came after she’d spent some time in Sardinia, Italy and the French Island Corsica.

The extravagant spending comes amid troubles with her lifestyle site Poosh. As Radar readers know, Kourtney, 40, hasn’t had the entrepreneur success that her billionaire half-sister Kylie, 22, enjoys.

After finally creating her own luxury lifestyle brand to distinguish herself from her highly-accomplished sisters, Kourtney is struggling with the fact the Poosh website isn’t taking off.

“Kourtney doesn’t understand why Poosh isn’t taking off like she was hoping, but she is blaming Kris,” a source told Radar. “She thinks Kris has focused so much of her time and energy into Kylie and Kim, she completely neglected her.”

While Kourtney has put the blame on Kris, she is “failing to recognize that her s**t is overpriced, and most of her fans simply cannot afford the Poosh lifestyle.”