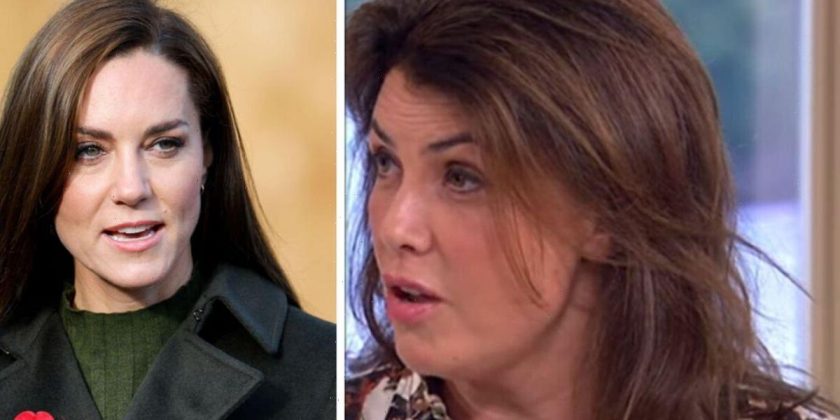 Despite being married into the Royal Family for more than 11 years most people refer to the newly titled Princess of Wales as Kate Middleton. Kirstie Allsopp’s comments come after a recent engagement, where the royal made a surprise visit to Colham Manor Children’s Centre in Hillingdon in West London on November 9.

The Princess of Wales gave away her poppy to a little boy who took a shine to it during an adorable moment.

Kate shared the heartwarming encounter with three-year-old Akeem after joining a mother and baby group and speaking to parents who have received support for their mental health.

The curious youngster asked her what her name was before pointing to the poppy saying “You have a flower”.

Answering the young boy, as she knelt down beside him and held his hand, the future queen said: “My name is Catherine, do you have a poppy? Would you like mine?”

Taking to Twitter on November 12, Kirstie reacted to the sweet encounter, as she urged people to “think”.

It comes after she shared a video of the sweet moment and urged others to refer to the royal by her full name.

She told her 430,000 followers: “This is totally lovely, and there is one extra bit to think about, ‘my name is Catherine’ is her reply when asked. It’s time we grew up and stopped banging on about Kate, it isn’t her name.”

Marie-Collette tweeted: “People were and are still saying lady Di, for Princess Diana. It’s not a big deal.”

Miami Sun Bunny commented: “Catherine was ‘Kate’ before she got engaged and wanted to royal up and formalised her name to Catherine. Acting like she was never a Kate is silly.”

Vicki said: “I think it’s all about preference. I’m actually Victoria but nobody has called me that since I was a child. It’s Vicki. We should just all respect what a person wishes to be called. She’s chosen Catherine.”

Betsy shared: “Of course, she said her name is Catherine – that’s what it is. That doesn’t mean she doesn’t like being called Kate, and I will continue to do so.”

Bluesey shared: “I don’t think Kate is that big of a problem, but I love that she just uses her name instead of her title.”

Born Catherine Elizabeth Middleton, the now 40-year-old went by Catherine during her childhood and at school, until her college days, when she switched to Kate, according to People.

This is where Catherine met Prince William, who is said to have called her “Kate” before she chose to switch back to Catherine around 2008.

It had been widely reported at the time, Catherine asked friends to stop calling her Kate, before becoming a member of the royal family.

Kate uses her full name in all her official royal correspondence, and signs off her emails with “C”.

But she is not the only royal to go by a slightly different name.

The Duchess of Sussex is also known as Meghan Markle – but this isn’t the name on her birth certificate.

Meghan’s full name is actually Rachel Meghan Markle, and she has previously shared her parents had always referred to her as “Meg” or “Meghan” for most of her life.