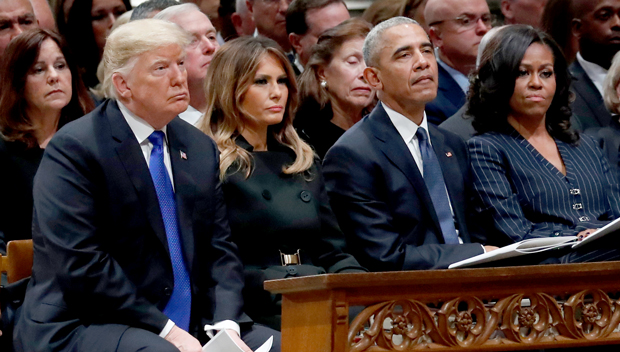 Jimmy Kimmel commented on the icy interaction between the Trumps & the Obamas & Clintons at George H.W. Bush’s funeral! Check out his breakdown of the awkward moment here!

By now, you’ve probably already seen clips of Donald Trump arriving at George H.W. Bush‘s funeral on Dec. 5, and how the mood definitely became more tense as he joined the same pew as Michelle Obama, Barack Obama, Bill Clinton and Hillary Clinton. Needless to say, pretty much all of late-night television noticed the iciness of the Trumps and Obamas’ interaction. In his Dec. 5 monologue, Jimmy Kimmel joked, “Watch the look from Michelle Obama because it’s so frosty she may have reversed global warming right here. Meanwhile, Hillary is just staring straight ahead like she’s on an elevator with a weirdo.”

On top of that, Stephen Colbert commented on the shift in mood as well. “It was quite a moving sight to see the presidents and the first ladies in the front row, waiting to honor President Bush, chatting comfortably with one another, until Trump showed up and then it became silent staring time,” Colbert quipped. “Donald Trump is the only person in the world who can bring down a funeral.”

Meanwhile, if the tension was visible to all of us, it was also palpable for Melania, who was sandwiched right in between Donald and Barack Obama. “Melania felt like she was getting major tension from both Michelle Obama and Hillary Clinton at Bush’s funeral, but she did her best to remain stoic and not let the negative energy bother her,” a Washington D.C. insider told HollywoodLife.com EXCLUSIVELY. “Melania felt uncomfortable with the other women, but it is nothing new nothing she hasn’t already felt from them and dealt with in the past. The first lady was prepared for it and is now used to feeling like a bit of an outsider.”

We’ll keep you posted with all of the latest news about Michelle Obama. In the meantime, check out all of her most recent photos in our gallery above.