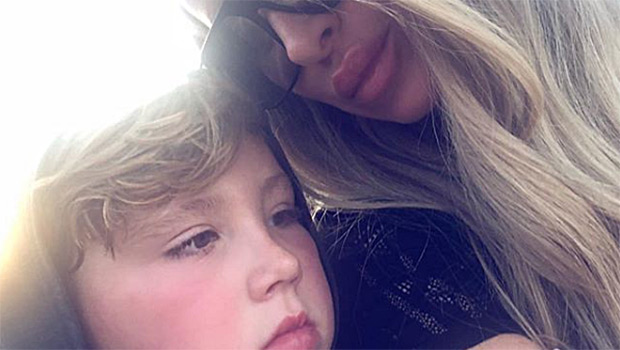 This can’t really be Kash, can it? Kim Zolciak’s six-year-old looks like he’s headed to work, not school, in this new pic. See what fans had to say about his size — and his booster seat!

What’s in the water at Kim Zolciak‘s house? When the 40-year-old reality star posted a photo of her son in a booster seat headed to school, she was flooded with comments about how “huge” Kash Biermann, 6, looked for his age. “My baby @kashbiermann on the way to school this morning!” she captioned the shocking shot. “He is such a BIG BOY he is only 6. He melts me. His heart is unreal #HairKing.” In the pic, Kash was in a booster seat, looking out of the window while wearing tan pants and a gray sweater. “I’d believe you more if you said you were chauffeuring a client to the stock market,” one of her followers said. Another added, “This is the starting quarterback for Ohio State.” LOL!

Those who weren’t commenting on how grown-up Kash looked honed in on the fact that he was sitting in a booster seat, saying that he exceeded the weight limit. “That’s a grown man in a booster seat,” one user wrote. But whatever the case, the last time this little guy was on our radar was when he was bit in the face by the family dog, Sinner. Back then, his poor face was scarred and bruised by the attack — but that was exactly a year ago and he looks so much bigger. We doubt that dog would even think of going after him now!

My baby @kashbiermann on the way to school this morning! He is such a BIG BOY he is only 6 ? he melts me ❤️ his heart is unreal ?? #HairKing

Kroy and Kim have five kids together — Brielle, 21, Ariana, 17, Kroy, 7, and Kane, 5, and Kash — and after seeing this six-year-old looking so grown, we’re dying for a full family pic!