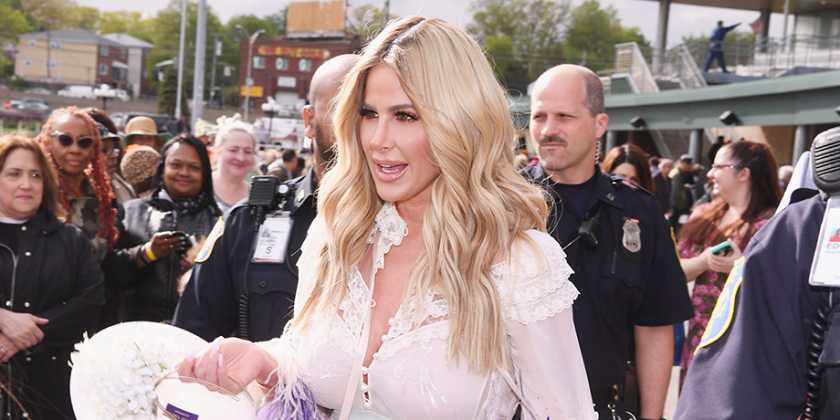 Over the years, Kim Zolciak’s appearance has evolved. From breast implants to lip fillers rumors, Kim Zolciak has made quite an effort to enhance her appearance. But despite her striking looks, there are still critics on social media that have no reservations about criticizing her for the plastic surgeries. However, Kim Zolciak has fiercely defended her decisions and she recently released a colorful message to those criticizing her. According to Radar Online, the former Real Housewives of Atlanta star has grown tired of the backlash and she recently took to social media to defend herself.

It has been reported that Kim Zolciak recently took to Instagram with a photo of her new breast enhancements in response to all of the criticism surrounding her plastic surgeries. The famed reality star shared a video proudly showing off her new implants. She tagged her plastic surgeon, Dr. Leonard Hochstein, and doted on his work. When she shared the post, many social media fans quickly noticed her lip fillers reportedly describing them as “ridiculous.” Kim Zolciak wasted no time responding to the stark criticism. She made it clear she’s fine with her fillers, regardless of how fans feel about them.

The latest news follows Kim Zolciak’s previous statements about her plastic surgeries. Over the summer, she spoke about her implants explaining why she liked them.

“I obviously have implants I have the largest implants they actually make, but it doesn’t look that big on my body because of just the way I’m built,” Kim said. “But, I’m thinking about actually getting my boobs reduced.”

Needless to say, many of the comments were relatively brash and her followers didn’t hold back when it came to the criticism, but Kim Zolciak has adamantly refused to let the comments destroy her self esteem. Regardless of what people say, she’s continued to stand her ground.

During that interview, Kim also talked about her lip injections and shared her response to the negative comments about them.

“I really don’t care,” she told People. “I overdraw [my lips] quite a bit. They do look large and in charge, but I love them, I do. I’m totally happy with them.”

She also discussed the moments when she feels compelled to stand her ground on social media. “I definitely have my moments where I’ll write back to somebody. [But] I really don’t care.”

Despite the heightened criticism, Kim Zolciak has made it clear she has no plans to give up plastic surgery or any of her physical enhancements anytime soon.