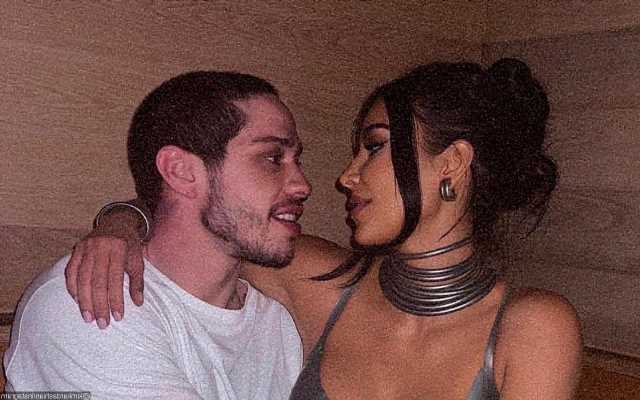 The former ‘Keeping Up with the Kardashians’ star and the ‘Saturday Night Live’ cast member hold hands as they make their way to their table at the event.

AceShowbiz –Kim Kardashian has made her romance with Pete Davidson red carpet official. The “Keeping Up with the Kardashians” alum and the “Saturday Night Live” star posed for the camera together when attending the White House Correspondents’ Dinner.

The 41-year-old, who was invited on behalf of ABC as her new Hulu reality series “The Kardashians” debuted weeks prior, was walking hand-in-hand with her comedian beau at the Saturday, April 30 event. The pair were joined by their crew as they made their way to their table.

Kim looked stunnning in a form-fitting, shimmering silver gown. Pete, in the meantime, opted to go with a black suit, matching sunglasses, a skinny tie and Vans.

Kim and Pete sparked romance rumors last October after she hosted “SNL”. The couple only decided to make their relationship Instagram official in March. Since then, the SKIMS founder has been open about their relationship.

When speaking to Hoda Kotb in mid-April, the ex-wife of Kanye West gushed how happy she becomes after dating the funnyman. “We were driving in the car yesterday and I just, like, looked at him and I was like, ‘Thank you,’ ” she recalled. “And he was like, ‘What?’ And I was like, ‘For running errands with me, like, this is so much fun just to, like, go to a doctor’s appointment or go to the dentist and just, like, run errands. I’m having so much fun.’ “

Claiming that their romance was the “last thing that I was really planning,” Kim added, “I think that, you know, sometimes things happen when you just least expect it.” She continued, “And so when it did happen, we were kind of, like, ‘Oh, my God, I wasn’t planning on this. And this isn’t even what I was thinking of.’ [It] just makes it that much sweeter and so much more fun.”