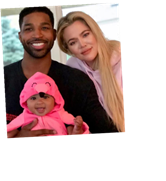 If you’re a Khloe Kardashian fan, there’s a good chance that you’re not crazy about Tristanb Thompson.

But whether you love him or hate him, there’s no denying that Koko is head over heels for TT.

So you can be certain Khloe is beyond excited about the latest development in her relationship.

Tristan signed with the Boston Celtics recently, and while Khloe is said to be less than thrilled with the thought of living 3,000 milies away from the father of her child, she’s come to accept the harsh realities of being the partner to a pro athlete.

Fortunately, that bit of bad news was followed by a major piece of good news.

Khloe visited Tristan in Boston before Christmas, and it seems he surprised with the present she’s been waiting for — a massive diamond ring.

But don’t popping the champagne botttles just yet.

Unfortunately, it seems the ring was not accompanied by a marriage proposal.

No, according to a new report from In Touch, the giant rock was simply a promise ring — but Khloe was still thrilled to receive it.

“Tristan surprised Khloe with a huge diamond,” a source tells the tabloid.

“It’s more of a promise ring than anything else, and she absolutely loves it! He gave it to her while she was in Boston just before Christmas.”

It seems the ring is just the latest gesture in Tristan’s long campaign to prove to Khloe that he can still be trusted.

“Tristan is going above and beyond to make it up to Khloé after the cheating scandal and prove his commitment,” the insider added.

“He feels ready to marry her, but she needs to totally trust him first — and it will take more than a million-dollar ring, but they’re making progress and things are going well between them.”

Since Tristan was caught cheating on Khloe on two separate occasions (and with many different women), it’s not surprising that she would have major qualms about him living on the opposite coast.

But it seems that absence had made both hearts grow fonder, and Khloe and Tristan are more certain of their relationship than ever before.

“Tristan has been really missing Khloé and True since the move,” the source added.

“They had a great time together as a family in Boston — and looked at houses to rent, played in the snow and watched holiday movies. True doesn’t get to see the snow very often so [she] absolutely loved it!”

And in case you’re wondering just how serious the situation is — it seems lifelong SoCal resident Khloe is actually considering a move to Bean Town.

“Tristan has asked Khloé to move to Boston full-time, but she isn’t ready to take that step right now, and all her family and friends are in L.A.,” says the source.

Still, the fact that she’s even thinking about taking such a major leap is a sign that she’s gotten over her trust issues with Tristan.

Or maybe she wants to keep a closer eye on him in order to ensure that he doesn’t betray and humiliate her again.

Whatever the case, big things are happening with these two!