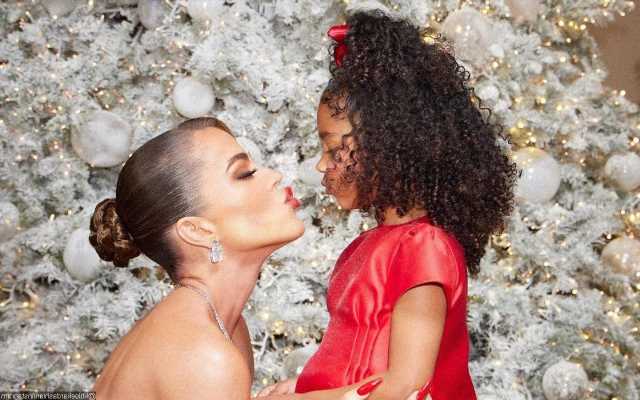 The ‘Kardashians’ star has a special treat for fans as she posts new family portraits in which she poses with her and ex Tristan Thompson’s daughter True and baby boy.

AceShowbiz –Khloe Kardashian made a big revelation on this year’s Christmas. “The Kardashians” star had a special treat for fans in the form of her first family portraits in which she gave a rare glimpse of her baby boy, whom she shares with Tristan Thompson.

In the Christmas pictures, Khloe posed along with her and Tristan’s firstborn True as well as their baby boy, whose name has yet to be revealed. The reality TV star looked gorgeous in a red strapless Nicolas Jebran gown while dripping in Lorraine Schwartz diamonds. She completed the look with a pair of strappy pointed Gianvito Rossi heels.

The Good American founder posed in front of a beautifully decorated Christmas tree while carrying her 5-month-old baby boy in her arms. The baby looked adorable in a black onesie to celebrate his first holiday season. Half of his face was featured in one of the snaps.

True, meanwhile, matched her mom’s look in a sweet red dress from LA ROXX with neutral Converse shoes and a red bow in her hair. The four-year-old also had a jeweled Santa Claus purse with her.

However, some fans were not happy with how Khloe is still being secretive when it comes to her son. “Why still so secretive about the name? Guess Kylie started a new trend,” one person wrote, referring to Khloe’s sister Kylie Jenner who has yet to reveal her baby boy’s face and name. “What’s the big secret with the baby boys, it’s getting tired,” someone else added.

“Why are we protecting all the male babies at all costs but not the women babies,” another user echoed the sentiment. “Why are you okay with exposing True, but not your son?” one other asked, while a naysayer opined, “Maybe she doesn’t think he’s cute enough to show.”

Khloe welcomed her son in July via surrogate. It was reported in September that the TV star and Tristan were not on speaking terms aside from “coordinating for the kids” after the NBA star was revealed to be cheating on her once again.