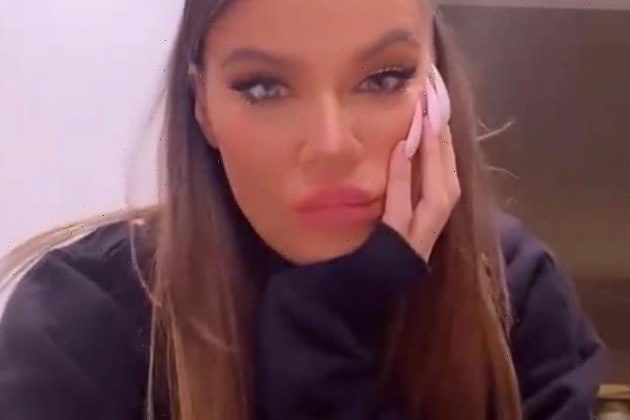 One of Khloe Kardashian’s unedited photos was leaked last week.

Khloe reportedly went ballistic and demanded that the pic be scrubbed from the internet.

Now, though, she may stand to profit from the leaked photo scandal.

Fans are accusing her of hypocrisy and asking that she at least admit that she’s part of the problem.

She spoke about how she had spent years being ridiculed for her looks online.

She was adamant that she gets to decide how she looks … even if she is unrecognizable in many photos.

After all, it’s horrible to see anyone — including a beautiful woman like Khloe — so repulsed by her own face and body.

But then, people began to point out that Khloe’s issue is more than just body dysmorphia.

Khloe may still see herself as the “ugly” sister — which she never was.

But as fans have noted, even if that had been true, it’s no longer the case.

And when a beautiful woman with a conventionally attractive, fit body photoshops herself … what does that do?

The answer, grimly, is that it makes her part of the problem.

(When she’s a celebrity, anyway — her impact goes well beyond most people’s)

When she edits herself into looking like a Pixar character or an abs model, people aren’t fooled — but it has an impact.

The message that is driven home when someone like Khloe augments her looks like that is simple:

While it’s likely that Khloe is telling herself this, too, she also seems to be broadcasting it to the world.

This isn’t new, of course.

Khloe has been caught doing obvious photoshops and edits to her face and body for years.

But with her recent scramble to delete a photo, she is reminding people that she’s now part of the body-shaming culture that she rails against.

Khloe is doing more than just sending a harmful message.

That alone is still a big deal, considering the massive cultural impact that the Kardashians have.

But Khloe’s fixation also draws accusations of hypocrisy … because, well, isnt’ she profiting from it?

Khloe worked hard, turning her entire lifestyle into one long, agonizing fitness schedule, to get her “revenge body.”

She also wrote a whole book about it and marketed herself in that way.

She should be applauded for making her body look more like how she wants it. But let’s be clear — she’s made money from that.

Obtaining her revenge body gave Khloe more than just an excuse to sell a book.

We all know that her build plays a role in her clothing line and in the endorsements that has done.

Body dysmorphia is a personal struggle of hers. The marketing angle of her body makes it, well, public.

There are many unfair things that come with fame.

But she chose to be a public figure by, as an adult, becoming one of the world’s most recognizable reality stars.

The exact same social forces that make Khloe so unhappy have also made her even richer than she already was.

We are not saying that body-shaming Khloe is okay. It isn’t, and it never was.

But sometimes the things that Khloe perceives as personal attacks, these days, are nothing of the sort.

In Khloe’s view, even if she edits herself into the uncanny valley, no one should be talking about her ever-changing face.

The thing is that fans, at large, are not insulting her actual, human face — but the extreme editing and filtering that she does to it.

How does she imagine that young women feel when they see this beautiful, fit woman hide behind filters?

Obviously, it’s not Khloe’s job to be a role model to fans and she doesn’t really market herself as an idol for teens.

But the over-the-top distortion of her image does make her part of the exact problem that she rails against.

We hope that she is in therapy. No exercise and no photoshop can heal a problem that exists in someone’s mind.