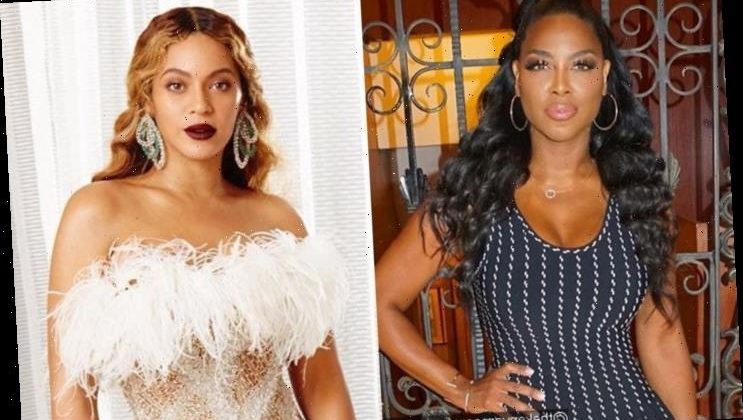 Not only her ‘The Real Housewives of Atlanta’ co-stars who are not convinced by Kenya’s claim, but also the show’s fans don’t see the resemblance between the two stars.

AceShowbiz –Kenya Moore made quite a shocking claim that has got a lot of people disagreeing with her. In old footage from season 5 of “The Real Housewives of Atlanta“, the reality TV star told her co-stars during a meal that she got mistaken for Beyonce Knowles all the time.

“Everyday somebody thinks I’m Beyonce,” so she claimed. Affirming her statement, she added that people once stood in line at a Presidential inauguration to take a photo with her, thinking she was the R&B diva.

But her friends were not convinced, with Porsha Williams saying in confessional, “You don’t look like Beyonce. I don’t know who told you that to get in your pants. It’s not true.” She additionally joked that she looked like Beyonce’s sister Solange Knowles. “I will emancipate myself from the family,” she told her friends.

Cynthia Bailey added while speaking to the camera, “Kenya thinks she looks so much like Beyonce, why can’t she get her man to put a ring on it?”

After the video resurfaced online, people have also weighed in on Kenya’s claim. Agreeing with her co-stars, one Twitter user wrote, “I hate them lol. But this is funny #rhoa. Even he knows she doesn’t look like Beyonce #Kenya.” Another commented, “Looool I refuse to believe there’s people that think Kenya looks like Beyonce????”

A third user quipped, “I love Kenya & people say I look like her so I must look like Beyonce too.” Someone else added, “Kandi’s and Nene’s faces … Kenya is pretty but didn’t nobody mistake her for Beyonce. Her and Beyonce two different skin tones she know and they know she was lying.”

While many disagreed that Kenya looks like Beyonce, the “Formation” songstress appeared to have taken notice of the reality TV star. The 38-year-old singer referenced one of Kenya’s infamous catch-phrases “gone with the wind fabulous” after her performance at the 2013 Super Bowl. Kenya first stated the line during an argument with Porsha.