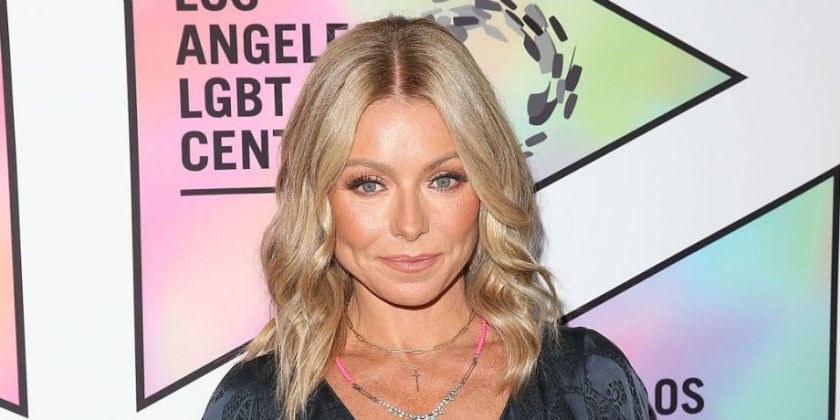 On the last day of 2018, Kelly Ripa shared fond memories of past New Year’s Eves in a slideshow on her Instagram page. The morning talk show host posted 10 throwback photographs from previous celebrations on the social media site.

The bulk of the pictures the 48-year-old posted on Instagram were of her gorgeous family: 47-year-old husband Mark Consuelos, 21-year-old son Michael, 17-year-old daughter Lola, and 15-year-old son Joaquin.

Photo No. 1, which was taken a few years ago, features the lovely quintet all smiling for the camera. The only indication that it is New Year’s Eve is the festive “Happy New Year” hats that Ripa’s sons are wearing.

The second photo is of Ripa and Consuelos partying with another married couple, Lucifer actress Rachael Harris and violinist Christian Hebel. Ripa is sporting a “Happy New Year” headband, Hebel has a tiny hat on the side of his head, Harris is blowing a party noisemaker, and Consuelos is oddly wearing sunglasses that have plastic guns attached to the frames.

The next photo is an old daddy-daughter pic of Consuelos and Lola, who has on a party hat and is blowing a noisemaker that has colorful streamers attached to it.

The fourth snapshot was taken outside on what appears to be a cold New Year’s Eve as Ripa and Joaquin are both wrapped up in cream-colored blankets.

The following photo is just of Ripa and Consuelos, who have been married for 22 years. The blonde star, wearing a colorful fringed jacket and her New Year’s headband, is laying on her husband, who currently stars in The CW drama Riverdale.

Joaquin is featured in snapshots six and seven. In one pic, he smiles for mom’s camera along with his older brother, Michael. In the other photo, he’s wearing a newsboy cap and grinning next to musician Jake Shears.

The next shot is one that Ripa took of Consuelos from behind. He’s standing on an outside deck in a snow-covered region and his hands are raised up in appreciation of the great mountain view he has.

Picture No. 9 is of the beautiful Lola, who usually has to approve of photos her mother posts of her on social media. The teenager is standing in front of metallic gold fringed curtain and she has a pacifier candy pop on one of her fingers.

The final pic is the most recent one. It’s a selfie of Ripa, in her favorite “Happy New Year” headband yet again, with a smiling Joaquin and Michael. Lola sits on the couch in the background oblivious to the photo being snapped.

A look back from several New Year’s Eves past, or at least what was stored on my cell phone. The kids grow, but the party hats stay the same ✨??⚡️???

Ripa hasn’t revealed how she planned on spending this particular New Year’s Eve, but her 2.1 million followers hope she will share pictures from the night on Instagram at some point in 2019.