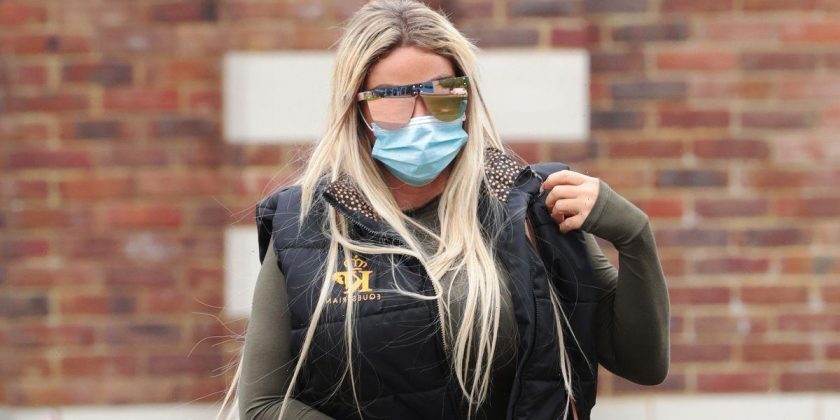 Katie Price has plead not guilty to allegations she breached a restraining order, forbidding her from contacting Kieran Hayler's fiancee.

The model, 43, was charged with breaching restraining order after she allegedly sent a foul-mouthed message to calling her ex husband Kieran Hayler's fiancee Michelle Penticost a "gutter s**g" in a text to him.

She has now pleaded not guilty to the charge at Crawley Magistrates' Court on Wednesday 27 April.

Katie wore a khaki green long-sleeved top and matching leggings with a black, puffer gilet, from her KP Equestrian brand, over the top as she was photographed arriving at Crawley Magistrates' Court on Wednesday.

She added a pair of mirrored sunglasses and a black and brown satchel-style handbag with a long strap, which she rested on her shoulder.

Katie covered her mouth and nose with a blue face mask and had her long blonde locks in a down, straight hairstyle for her court appearance.

She was arrested on Friday 21 January and questioned at Worthing Police Station over allegations she breached a restraining order, meaning she is not allowed to contact Kieran's fiancee Michelle.

TV personality Katie was held in custody for 12 hours after the arrest at her mucky mansion.

At the time of her arrest, Katie was serving a 16-week suspended sentence after she plead guilty to drink diving, driving whilst disqualified and driving without insurance following a crash near her home in September.

A person can be recalled to prison for the length of their suspended sentence if they breach the terms of the licence.

Katie could face a maximum of five years in prison if she is convicted for the alleged restraining order breach.

In this case, Katie could be jailed for five years with the 16 weeks running concurrently, or potentially on top of the main sentence. However, she will not be sentenced today as she is yet to enter a plea with regards to the charge.

Katie was handed a five-year restraining order in 2019 after swearing at Michelle in the school playground.

She is forbidden from contacting 35 year old Kieran's fiancee "directly or indirectly".

In a statement outside court following her conviction in 2019, Katie said: "Today I pleaded guilty to disorderly conduct not threatening anyone as the media are saying.

"In fact, I have never been charged with any form of threatening behaviour.

"I did swear but the rest is just exaggerated nonsense."

In December, Katie avoided jail after she was involved in a car crash near her home in Sussex as she overturned her BMW in September.

Katie was banned from driving when she got behind the wheel and was under the influence of alcohol at the time.

She plead guilty and as she was handed her suspended sentence, District Judge Amanda Kelly told Katie: "You seem to think you are above the law."