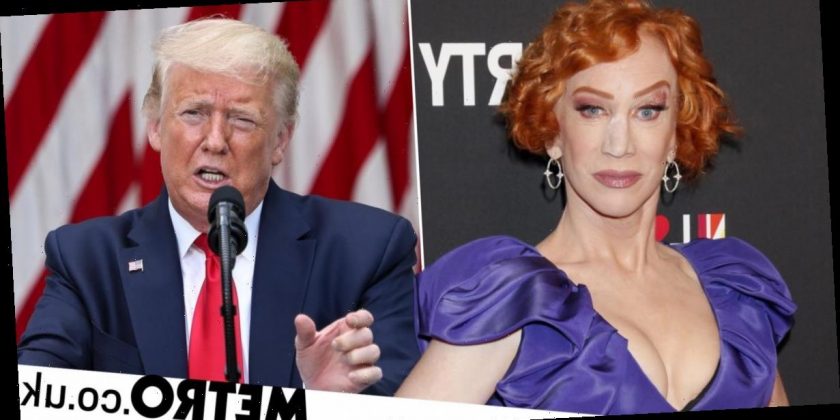 Kathy Griffin reposted a very controversial image of herself holding the bloody decapitated head of an effigy of Donald Trump in the aftermath of the US presidential election.

The comedian previously deleted the shot from the gory 2017 photo shoot, after being investigated by Secret Service agents over the stunt.

However, as Joe Biden gets closer to clinching a White House win, Griffin decided to repost the infamous picture on her 60th birthday.

The My Life On The D-List star was praised by fans for retweeting the photo taken by Tyler Shields, which saw her holding up a blood-soaked decapitated head of a Trump effigy by the hair, on November 4, the day after the US election.

Fans hoped that she wouldn’t delete the picture this time round, while others joked that she was in line for further questioning over the photo.

However, Griffin didn’t seem bothered by potential backlash, as she shared anti-Trump tweets as she celebrated her 60th birthday on day two of the count.

Griffin is, unsurprisingly, hoping for a Biden win, and it looks like it’s getting ever closer.

Biden currently has 264 electoral college votes as opposed to Trump’s 214, and only needs to win Nevada to claim victory.

However, Trump has suggested that the election is a ‘fraud on the American people’, and supporters have been showing up at count centres to protest the counting of votes.

Follow our US election live blog for the latest news and updates on the 2020 election.

Who is currently leading and what happens if neither candidate gets 270 votes? Find out here: