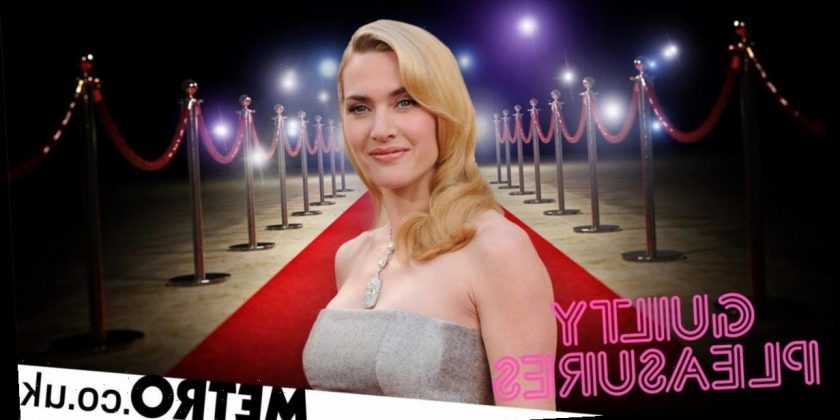 Kate Winslet says lockdown has made her realise movie premieres and splashing money on new red-carpet looks is a Titanic waste of time.

The Oscar winner is so disillusioned with it all she plans to recycle old outfits from the past and let them out a size to ‘squeeze my hot-and-bothered mum-on-the-school-run body’ back into them.

Not missing the glamour of being a film star one jot, the three times married star declared: ‘I love not getting into those f***ing dresses and those f***ing shoes. All the money… it’s always really pained me, the money that gets wasted on colossal, great big junkets: flying journalists, actors, glam squads all over the world. Why the hell is any of that important? If I cared what I looked like, I would have put make-up on right now.’

Now 44, Kate says: ‘The dresses, the stress, the dress fittings, it’s so stressful. I know that sounds like, “Oh, here goes Kate Winslet talking about how stressful it is to do dress fittings for award shows”, but it is stressful.’

She also told Vanity Fair: ‘I don’t like having to squeeze my hot-and-bothered mum-on-the-school-run body randomly into a red carpet dress that I’m never going to wear again. The hours and stress that people pour into these things.

‘The incredible artists who make these dresses are wonderful but to make something that’s only going to be worn once … I’ve already decided I’m doing repeat dresses. Everything will have to be let out, but whatever.’

The lingering Covid pandemic means Winslet is unlikely to have to walk the red carpet for her new lesbian love story Ammonite, co-starring Saoirse Ronan.

Little Simz will badger Top Boy co-star Ashley Walters to get back into music as they tackle series four of the Netflix show.

The singer is Shelley in the crime drama alongside actor and ex-So Solid Crew member Ashley, who plays lead character Dushane.

Reflecting on Ashley’s past as musician Asher D, the 26-year-old told Guilty Pleasures: ‘He is a huge part of pioneering what we know as our music scene today. I think everyone would want Ashley to continue to make music. He is super talented.’

Asked if she could convince him to go back into the studio, Simz teased: ‘I’ll try. I’ll have words.’

She recently set up her own independent record label, Age 101, and hopes to ‘inspire’ wannabes they don’t have to woo major studios to make it as mainstream artists.

But she’s not looking to sign up-and-coming talent. ‘I don’t feel comfortable at the prospect of having someone’s career in my hands. I’d drill the idea of ownership into people’s minds. The only thing you really have is your intellectual property,’ she said.

Meanwhile, Walters, 38, teased their new show on Instagram at the weekend by sharing a series of on-set snaps from Top Boy and captioning them: ‘Who is ready for more?’

The Smile singer welcomed her first child with Orlando Bloom last month, and posted a pic of a peach satin blanket with the words ‘Baby Bloom’ on it.

‘Miss [Daisy Dove] adores her hand embroidered blankie from @taylorswift. Hope it’s one she drags around till it becomes an unrecognizable shred she keeps in her pocket as a teenager,’ she wrote. Part of a note from Blank Space singer Swift, 30, who ended her feud with Perry, 35, in 2018, was also seen in the snap.

It read: ‘Katy and Orlando, my most (unclear) possession was a tiny silk…’

Meanwhile, Katy is to create a documentary after being inspired by Swift’s film Miss Americana on Netflix.

Miley’s looking for love in the bargain basement

Miley Cyrus wants her next romance to be a rags over riches love story.

The singer, who has divorced actor Liam Hemsworth and split with ex-girlfriend Kaitlynn Carter and singer Cody Simpson over the past 18 months, says she finds materialistic-minded people a turn-off.

‘I don’t like people that brag. It’s not impressive. If you told me, “Dude, I found these at a thrift store for $5”, I’d think you’re much cooler,’ the Midnight Sky singer, 27, said.

‘Some people put so much value into what they have instead of who they are. I just think you’re trying to make up for something. I want someone that’s dependable,’ she added.

Holmes accent was Brit of a mystery

Millie Bobby Brown found it ‘challenging’ being British in her new role because she has got so used to speaking in an American accent.

The actress, 16, shot to fame in sci-fi drama Stranger Things and now plays Enola Holmes, the sister of fictional detective Sherlock, in a new Netflix film.

‘Even though I am a Brit, I had to learn how to speak again as I’m so used to speaking in an American accent,’ she told the Radio Times.

The film, co-starring Henry Cavill and Sam Claflin, is based on Nancy Springer’s book series and will be aired on Netflix from September 23.

My secret for Holden on to youth

Amanda Holden insists she has not gone under the knife, claiming it is her eyebrows that make her look younger.

Teased about her flawless looks after a clip from a 2009 Britain’s Got Talent episode was shown on Good Morning Britain yesterday, former show judge Piers Morgan said: ‘You are like Benjamin Button… you look younger every year.’ Holden, 49, replied: ‘Thank you, it’s all in the eyebrows.’

She also revealed BGT boss Simon Cowell, 60, is ‘up and about’ after having back surgery following an eBike accident.

‘He is such a workaholic,’ she said. ‘He’s taking calls, watching the show and having a lot to do with the edit. I think he’s on the road to recovery.’