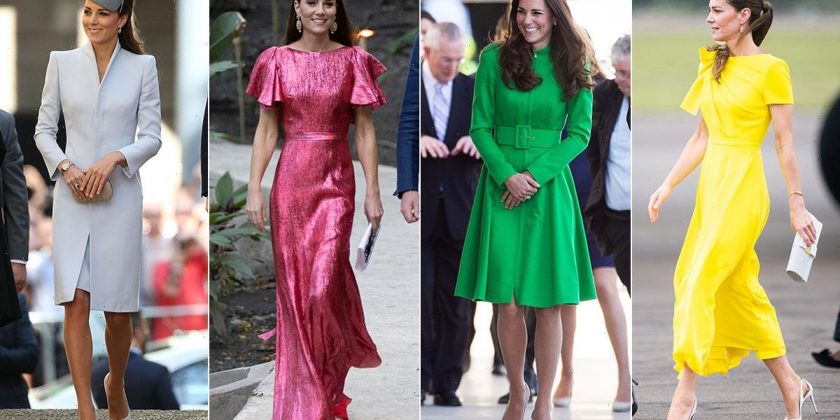 The Duchess of Cambridge is known to debut some beautiful looks when she steps out for royal engagements. Her oversees wardrobe is equally as mesmerising, as proven by her recent visit to the Caribbean alongside Prince William for the royal tour.

From The Bahamas to India, Canada and more, we’ve rounded some of Kate Middleton’s best looks from royal tours across the years. Keep scrolling to discover some serious style inspiration…

Kate dazzled in a romantic metallic pink dress from The Vampire’s Wife.

Featuring dramatic flutter sleeves and an iridescent shimmer, the royal looked breathtaking as she attended the reception at the Mayan ruins of Cahal Pech hosted by the Governor General of Belize.

Kate hit another sartorial high as she joined her husband to meet the Indian Prime Minister Narendra Modi.

The elegant royal chose a feminine but modern design in a beautiful jade green by one of her favorite designers, Alice Temperley, for the event.

She completed her look with a pair of nude heels and her L.K. Bennett ‘Natalie’ straw clutch bag.

She later revealed that on their way to the Sydney Opera House, the Duke told her she “looked like a banana!”

For her second day of her second royal tour to Canada, Kate chose a red-patterned Alexander McQueen dress with red pumps as she and William visited Vancouver.

In 2011 for Canada Day celebrations on Parliament Hill, Kate delighted the crowds by wearing the country’s national colors, pairing her white dress with red L.K. Bennett heels and a jaunty Sylvia Fletcher at Lock and Co. hat, which featured a maple leaf emblem.

Prince William coordinated with his wife by sporting a festive red tie.

Kate exuded Hollywood glamour wearing a romantic Alexander McQueen gown and diamond earrings lent to her by Her Majesty for the 2011 BAFTA Brits Gala in Los Angeles.

The Duchess received worldwide praise for her debut appearances in India. Kicking off the 2016 trip, Kate stepped out sporting an eye-catching peplum blouse and skirt design from Alexander McQueen.

While the fashion house is British, the outfit still gave a nod to India with its traditional tear drop-shaped print.

The Duchess wowed in a striking marigold dress as she touched down in Jamaica. The royal looked radiant in the sumptuous yellow bespoke number by Roksanda.

She teamed the dress with white heels and clasped a Salvatore Ferragamo white clutch to complete her island aesthetic.

An aide revealed that the Duchess was keen to fly the flag for local fashion during the trip. “She wanted to wear a local designer at the earliest possible opportunity,” they said, adding that the choice of dress was “a tribute to Mumbai’s wonderful design talent.”

Kate did not disappoint for her highly-anticipated appearance at the Bollywood gala.

The Duchess of Cambridge stunned in a royal blue gown by her favorite designer Jenny Packham.

Kate sported an elegant cream wool crepe dress by one of her favorite designers, Emilia Wickstead, on the second day of her visit to India.

Originally on sale for $2,335, the dress features a collar and chest pocket detailing. The silhouette, with a fitted bodice and full sweeping skirt, is one that the Duchess is known to favor and on this occasion she completed her look with a pair of Rupert Sanderson heels and a Mulberry England Bayswater clutch bag.

Kate dazzled at a reception held in their honour on the last night of their jam-packed Caribbean royal tour.

William and Kate were VIP guests at the event hosted by the Bahamas’ Governor General at the Baha Mar Hotel in Nassau.

The Duchess  stepped out in the Phillipa Lepley Vienna Crossover satin dress with tie-detailing on the shoulders.

Showing us that it isn’t all about designer tags, Kate modeled a stunning pink Topshop dress with intricate black embroidering.

Princess Charlotte’s mom added a touch of sparkle to the look with her bargain $11 earrings from Accessorize.

For her departure from Belize to Jamaica, Kate sported a chic vintage Yves Saint Laurent jacket in a radiant strawberry red hue, white palazzo trousers, a white Mulberry handbag, white pumps and accessorised with some earrings from Anthropologie.

The royal bought the red pièce de resistance during her time at university – we love a sustainable choice!

With a six-hour trek ahead of her, Kate opted for comfortable and easy-to-wear gear. But the ever stylish Duchess managed to make casual look chic as she began the grueling hike in Bhutan.

Kate looked ready to take on the challenge wearing jeans, a white shirt and a dark brown leather waistcoat designed by one of her favorite outdoor British brands Really Wild, which she has worn in the past.

The Duchess of Cambridge wore a navy tweed coat dress by Michael Kors for the Anzac Day memorial service during her royal tour of Australia in 2014.

The Duchess of Cambridge looked resplendent in a red skirt suit by Louise Spagnoli for a trip to Christchurch’s Botanical Gardens.

During her trip to a chocolate factory in Belize, Kate debuted a sweet poplin midi dress cut from a floral electric blue fabric by Tory Burch.

Featuring a delicate tea dress silhouette, subtle short sleeve puff shoulders and tiered skirt, the dress enabled Kate to soak up some island sunshine as she met with locals.

Kate stuck with her favorite designers for a trip to the Kranji war memorial, opting for a Jenny Packham dress and L.K. Bennett heels. She added a nude parasol to protect her from the heat in Singapore.

Kate had royal fans green with envy wearing an emerald Erdem coat for a 2014 visit to a children’s hospital in New Zealand.

An Alexander McQueen coat, Jane Taylor headpiece and L.K. Bennett courts were chosen for the royal’s trip to St. Andrew’s Cathedral in Sydney.

The Duchess teamed a blush pink Alexander McQueen dress with her trusty pair of nude L.K. Bennett pumps for a trip to the skate park in Adelaide, Australia.

Kate touched down in the sun-soaked Bahamas looking sensational in a bespoke turquoise Emilia Wickstead dress.

Boasting sweet feminine flap collar detailing, long sleeves and midi skirt length, the dress ensured that the mother-of-three made a statement in blue.

The Duchess wore an aquamarine Emilia Wickstead dress as she touched down at Dunedin International Airport in New Zealand.

Kate stunned in emerald green as she departed from Jamaica in 2022. The royal looked radiant in the Emilia Wickstead dress that featured short sleeves and floating skirt.

The Duchess wore her trusty nude heels teamed with some cushion drop diamond earrings to elevate the look.

The mother of two pulled out all the stops for a state dinner in Malaysia, donning a custom Alexander McQueen dress by Sarah Burton. The gold embroidery was made using hibiscus, Malaysia’s national flower.

Kate attended a dinner hosted by the Governor General of Jamaica wearing a beautiful princess gown by Jenny Packham.

The royal looked as if she had strolled out of the pages of a fairytale book in the sparkling emerald green dress, which featured a striking off-the-shoulder tulle neckline trim and a generous dusting of glitter.

For a visit to the Royal Australian Air Force Base in Amberley, Kate chose a blue poppy print L.K. Bennett dress.

She added some sparkle with sapphire and diamond drop earrings and a necklace by Mappin & Webb.

The Duchess wore an aquamarine Emilia Wickstead dress as she touched down in 2014 at New Zealand’s Dunedin International Airport.