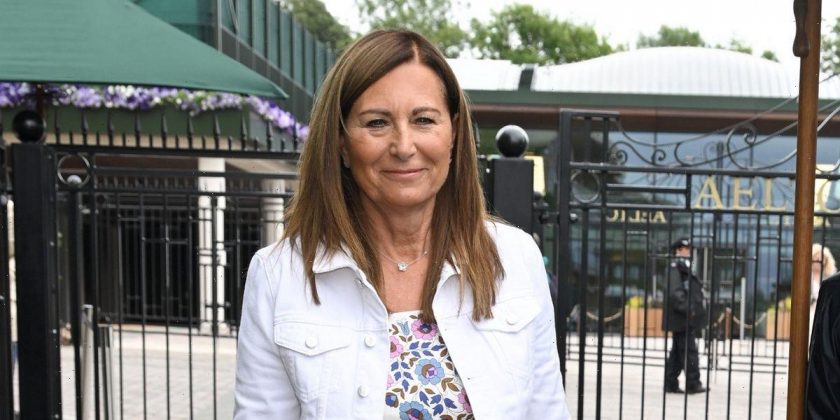 Kate Middleton’s mum Carole looked age defiant as she made a stylish appearance at Wimbledon on Wednesday.

The 67 year old was joined by her husband Michael Middleton, 73, and appeared very youthful as she sported a white cropped denim jacket at the tennis event.

Carole was pictured beaming as she also wore a pink floral print wide-legged jumpsuit, which she paired with light pink pointed Mary Jane pumps and accessorised her daytime look with a matching tote bag.

Michael looked sharp alongside his wife as he wore a cream suit jacket with a light blue shirt underneath and a red printed tie, and matched these with a pair of navy blue chinos and brown lace-up loafers.

The husband-and-wife of 42 years appeared in cheery spirits as they made their way inside the tennis event to catch the matches of the day, which include Novak Djokovic, Andy Murray and Emma Raducanu centre court.

Carole’s chic appearance comes after she was seen in an eye-catching bright pink shirt dress as she attended the Royal Ascot earlier this month.

The Duchess of Cambridge’s mum made sure to dress up for the occasion as she wore the silk pleated number with a large black fascinator, topping the list as one of the best outfitted guests at the annual horse racing event.

The dress was designed by ME+EM and was worn previously by Kate in May last year when she met a five-year-old cancer patient named Mila at Holyrood House.

Michael looked very dapper as he accompanied his wife at the Royal Ascot wearing a tuxedo with a matching top hat with grey pinstriped trousers and a light blue waistcoat.

The couple celebrated their wedding anniversary on 21 June at the Church of St James in Dorney, Buckinghamshire, and Carole is still seen rocking her engagement after several decades being married.

The stunning piece of jewellery features a square blue stone in the centre surrounded by sparkling diamonds and is similar to Carole’s daughter Pippa Middleton’s wedding ring.

"Carole’s ring is inspired by the art deco style of the 1920s and 30s,” diamond expert David Allen of 77 Diamonds told Express.co.uk.

“Featuring what looks to be a four-carat Asscher cut diamond, it is surrounded by an octagonal surround of round brilliant diamonds to give it that feel of yesteryear.

“Asscher cuts are uniquely clear and require a high clarity, so if this were of top quality, this would fetch in excess of £200,000."