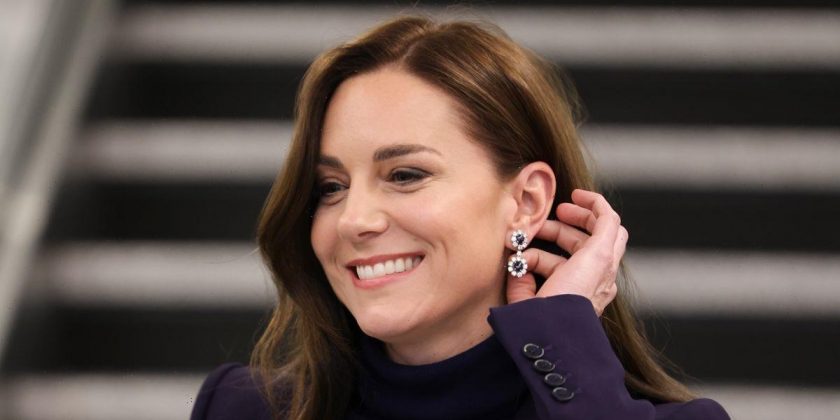 Kate Middleton paid tribute to Princess Diana with a pair of sapphire and diamond earrings that once belonged to her mother-in-law as she arrived in the US with Prince William.

The Prince and Princess of Wales were pictured arriving in Boston during a three day whirlwind tour on Wednesday 30 November with Kate giving a nod towards Diana with her jewellery.

The royal wore a shimmering pair of two-tiered flower-shaped earrings, which were previously owned by Princess Diana.

Diana was spotted wearing the earrings on several occasions – including when she attended the Met Gala in New York City in 1996 and during a visit to Canada in 1991.

The stunning earrings were also worn by Kate back in June when she attended Trooping the Colour as part of the Queen's birthday celebrations.

Kate paired her earrings with a stylish suit by Alexander McQueen – the same label that designed her wedding dress in 2011.

The princess paired the dark blue jacket and trousers with a knitted turtleneck and matching blue heels.

She was seen landing at the airport in Boston alongside Prince William, who flew together on a commercial flight.

The couple are in Boston for the Earthshot Prize awards and upon their arrival, William thanked the US city for agreeing to host his environmental awards and for the tributes its citizens paid to his late grandmother the Queen, minutes after landing and being greeted by the governor of Massachusetts Charlie Baker and his wife Lauren.

Soon after landing, William said in a written statement: "On this, our first overseas visit since the death of my grandmother, I would like to thank the people of Massachusetts and particularly of Boston for their many tributes paid to the late Queen. She remembered her 1976 bicentennial visit with great fondness.

"My grandmother was one of life’s optimists. And so am I. That is why last year we launched the Earthshot Prize with the ambition to create a truly global platform to inspire hope and urgent optimism as we look to save the future of our planet.

"To the people of Boston, thank you. I’m so grateful to you for allowing us to host the second year of the Earthshot prize in your great city.

"Catherine and I can’t wait to meet many of you in the days ahead."