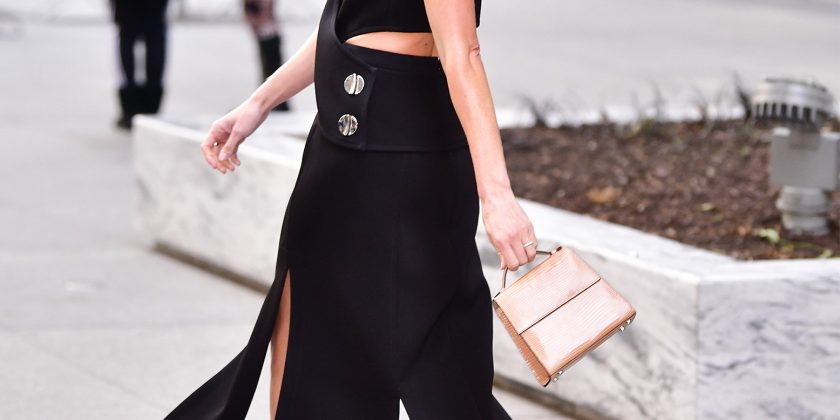 Miley Cyrus hops atop a car to perform with Mark Ronson on Thursday on The Graham Norton Show in London.

Camila Cabello has the time of her life while filming a commercial on Thursday in N.Y.C.

Chloé Sevigny rocks a strappy bikini on Thursday during a day out in Miami.

Chanel Iman, artist Alexandre Farto and Nas get together at the 2018 Hennessy Very Special Collector’s Edition by Vhils event as Art Basel kicks off in Miami on Wednesday.

Amal and George Clooney hold hands as they arrive at the 23rd Annual United Nations Correspondents Associations Awards in New York City, where Amal was awarded the Global Citizen of the Year Award.

Amber Heard and Eva Longoria share a laugh at the 13th Annual L’Oreal Women of Worth Awards at The Pierre Hotel in New York City on Wednesday.

Vox Lux costars Raffey Cassidy, Jude Law and Natalie Portman pose together at the after party for the film’s premiere on Wednesday in Los Angeles.

Camila Cabello gets into the holiday spirit with an Elf-themed onesie at Q102’s Jingle Ball in Philadelphia on Wednesday.

Cardi B steps out with rainbow hair for her first appearance after announcing her split from husband Offset at Art Basel in Miami.

Miley Cyrus takes a selfie with a fan in London on Wednesday.

Winnie Harlow pops a bottle of bubbly at a Miami Beach party for L’Eden by Perrier-Jouët on Wednesday.

Wednesday in Brooklyn, Phoebe Robinson and Jessica Williams discuss HBO’s 2 Dope Queens series, based on their hit WNYC podcast of the same name.

On Wednesday, Aly Raisman speaks at opening night of the 2018 Massachusetts Conference For Women in Boston.

Viola Davis beams as she accepts the Sherry Lansing Leadership Award during The Hollywood Reporter‘s Power 100 Women in Entertainment Awards on Wednesday in Los Angeles.

Penelope Cruz stuns in a black minidress at a SAG-AFTRA Conversations discussion of Everybody Knows on Wednesday in N.Y.C.

Wednesday in L.A., Mandy Moore stuns in a sleeveless dress at The Hollywood Reporter‘s 27th Annual Women In Entertainment Breakfast.

Kenan Thompson poses with costar Cameron Seely at a screening of The Grinch at Hassenfeld Children’s Hospital in N.Y.C. on Wednesday.

Wednesday in Milan, Halle Berry struts her stuff ahead of the 2019 Pirelli Calendar launch gala at HangarBicocca.

Hailee Steinfeld is interviewed by Hacker T. Dog at a special screening of Bumblebee in London on Wednesday.

Wednesday in London, Camilla, Duchess of Cornwall, is joined by men in inflatable dinosaur costumes as she takes calls at ICAP during the broker’s 26th annual Charity Day.

Mary Queen of Scots costars Margot Robbie and Saoirse Ronan pose together at the film’s New York premiere on Tuesday.

This Is Us star Milo Ventimiglia stops by “Extra” at Universal Studios Hollywood on Tuesday.

Olivia Wilde stuns in bold pops of color beside husband Jason Sudeikis at a special screening of If Beale Street Could Talk in Los Angeles on Tuesday.

Michael Bublé performs at the Telekom Street Gigs on Tuesday in Munich, Germany.

Maya Rudolph shows off an iPhone-sized purse as she hosts the BY FAR party along with Haim at Chateau Marmont on Tuesday in L.A.

Tuesday in London, Kit Harington and Johnny Flynn pose in costume at the press night of True West at the Vaudeville Theatre.

Karen Gillan waves as she leaves Jimmy Kimmel Live! in a jean jumpsuit on Tuesday in L.A.

Awkwafina and Isla Fisher pose together at Refinery29’s 29Rooms installation in L.A. on Tuesday.

Also there: Ashley Iaconetti and fiancé Jared Haibon, playfully getting into a Marvelous Mrs. Maisel-themed exhibit.

Ali Larter hosts the launch celebration for Meiomi’s Sparkling Wine at Ysabel in L.A. on Tuesday.

Julianne Moore arrives at the Chanel Metiers d’Art show in N.Y.C. on Tuesday.

Costars Chelsea Peretti and Terry Crews pose together at a press junket for Brooklyn Nine-Nine after it’s announced that Peretti will be leaving the show.

Tuesday in L.A., Christina Milian channels the dancing emoji in a red dress at the Hallmark Channel’s Once Upon A Christmas Miracle screening and holiday party.

Lupita Nyong’o and Angela Bassett speak at the Museum of Modern Art Contenders 2018 Screening of Black Panther on Tuesday in L.A.

Newlyweds Gwyneth Paltrow and Brad Falchuk show their support for Ryan Murphy as he’s honored with a star on the Hollywood Walk of Fame.

Spice Girls member Emma Bunton wears a festive printed suit for her visit to SiriusXM Studios on Tuesday in N.Y.C.

Elizabeth Chambers stuns in navy blue alongside husband Armie Hammer at the Paris premiere of On the Basis of Sex on Thursday.

Sir Ian McKellen, Dame Judi Dench and Sir Kenneth Branagh share a laugh at a BAFTA screening of All is True in London on Tuesday.

Gigi Hadid and Kaia Gerber have a major twinning moment at the Marc Jacobs Redux Grunge Collection launch in N.Y.C. on Monday.

Cher waves to the crowd during the opening night of The Cher Show at the Neil Simon Theatre in N.Y.C. on Monday.

Also there: a happy Amandla Stenberg and Tracee Ellis Ross

Ryan Reynolds stops by The Ellen DeGeneres Show in L.A. on Monday to joke about how he misses “being horrible” now that he’s a father.

Melanie Griffith and pal Goldie Hawn smile together at the Make Equality Reality Gala in L.A. on Monday.

Pete Davidson watches the New York Knicks play the Washington Wizards at Madison Square Garden in N.Y.C. after speaking out against bullying on Monday.

On Monday, Dax Shepard partners with Amazon to give back to his community with random acts of kindness, including donating to an L.A. food bank.

Julia Roberts reunites with her Ben Is Back family, Mia Fowler and Jakari Fraser, at the film’s premiere in N.Y.C. on Monday.

Monday in N.Y.C., Jaden Smith does some serious shopping at Louis Vuitton in SoHo.

Christie Brinkley stuns in a black minidress at the New York City premiere of Paris to Pittsburgh hosted by Bloomberg Philanthropies, National Geographic and RadicalMedia on Monday.

Daniel Day-Lewis bundles up for a walk in New York City on Monday.

Monday in San Francisco, Amy Adams poses at the SFFILM 2018 Awards Night at the Palace of Fine Arts Exhibition Center.

Lucas Hedges strays from the couch on Monday’s episode of The Late Show with Stephen Colbert in N.Y.C.

Christian Slater and honoree Glenn Close pose at the 32nd Annual Museum of the Moving Image Salute Gala on Monday in N.Y.C.

Jeff Goldblum plays piano with The Mildred Snitzer Orchestra on The Late Late Show with James Corden in L.A. on Monday.

Neil Rosen and Maggie Gyllenhaal chat at a special screening and reception for The Kindergarten Teacher in N.Y.C. on Monday.

J.K. Simmons looks sharp at the season 2 premiere of Counterpart at The Arclight Hollywood on Monday.

Amber Heard smiles for the cameras during a New York City outing on Monday.

Meanwhile, her Aquaman costar Jason Momoa has fun with photographers in N.Y.C.

Mary Poppins Returns costars Lin-Manuel Miranda and Emily Blunt pop by SiriusXM studios in N.Y.C. on Monday to talk up their film.

Also at SiriusXM on Monday: Michael Douglas, who chats with Hoda Kotb (not pictured).

Costars John Cena and Hailee Steinfeld get together for a photo call for their new film Bumblebee in Berlin on Monday.

Eva Longoria speaks onstage during The Change Agents keynote at the Teen Vogue Summit 2018 in L.A. on Saturday.

Dua Lipa and Offset buddy up at the second annual Variety Hitmakers Brunch at The Sunset Tower Hotel on Saturday in West Hollywood.