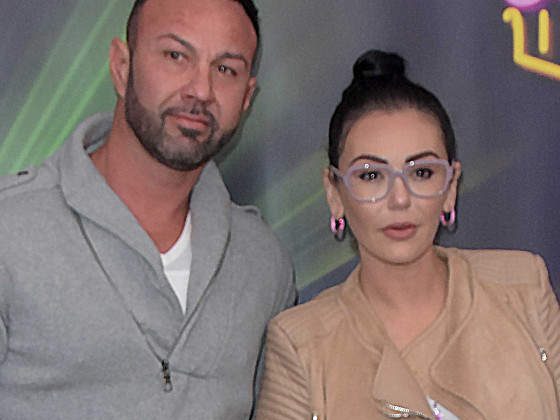 Remember when Jersey Shore used to be a bit of escapist fun that allowed us to mock a bunch of self-involved, bro’d and ho’d out ding dongs? Well, that reality show is over and a new kind of reality has taken over. The once fun loving JWoww, aka Jenni Farley, is now filled with rage. In a lengthy blog post on her website, Jenni shared video of her estranged husband, Roger Mathews, violently throwing her to the floor. She says she made the decision to share that private moment (as well as a number of recorded arguments, police reports, and text messages between her and the couple’s nanny) as self-defense against all the lies she alleges Roger has been spreading about her, claiming she will stop at nothing to keep him from his children, 2-year-old Greyson Valor, and 4-year-old Meilani Alexandra.

JWoww claims she held her tongue in the past for the sake of the kids, but the gloves are off now. You can read the entire post here. She said (via People):

“I have spent the last few months trying to protect our children from public humiliation, because as parents, WE ARE SUPPOSED TO PROTECT THEM”

“I can no longer sit idly by while you mistreat and malign me in such an egregious manner, you have presented yourself to the public as a praiseworthy father and a husband who has been suffering by my alleged actions and behavior”

Here’s a compilation of the videos she posted.

In December, JWoww obtained a restraining order against the Supreme High Commander of the Douche Canoe armada. At that time, Roger was arrested and decided to film his “ordeal” in a long series of videos of him riding in the back of a police car, smacking on his gum and getting chummy with the cop while he bitched and complained about his lying, vindictive wife. According to JWoww, Roger spends an inordinate amount of time creating a false reality on social media which paints him as a sainted super dad and her as a shrewish harpy, to the detriment and safety of their kids.

JWoww alleges that not only is Roger an abusive liar, he is also neglectful of the kids. She claimed that he fed Greyson, who is allergic to gluten and dairy, pizza and when she confronted him about it, he berated her. She says he’s filmed himself for social media while driving with the kids in the car. What’s more, she accuses him of conspiring with her ex-boyfriend, Thomas Lippolis, to extort money from her by threatening to release the contents of a USB drive. TMZ reports that the drive contains video of JWoww in hysterics while Roger holds a crying baby Greyson. Apparently, she shared part of that video in her post.

Throw back to a magical moment with my little girl. A father’s role is to be the standard and the example of what you want your daughter to look for in a man. Circumstances change, the world becomes ever more complex yet that standard must never falter. Stay true, and in the end it will all be ok. Daddy loves you Meilani.

Wow, if that’s not the literal definition of performative parenting, I don’t know what is. This dude is shameless.