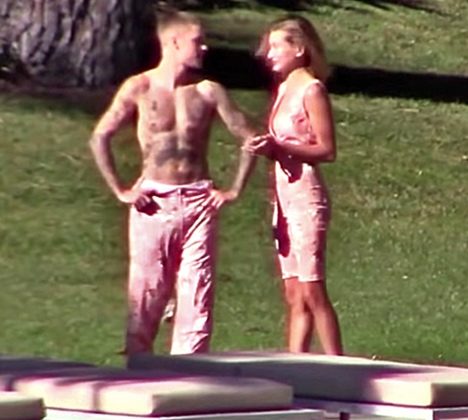 Justin Bieber and newlywed wife Hailey Bieber were spotted by paparazzi in Los Angeles yesterday doing a secluded beach shoot for famed celebrity photographer Annie Leibovitz. Given Annie’s involvement with a whole crew supporting her, it is likely that the shoot she is doing of Justin and Hailey is for Vanity Fair magazine.

In one video, Justin and Hailey can be seen making several changes of bathing suits, as Justin mostly poses shirtless. At one point, he also poses with a guitar while sitting on a beach chair, Hailey positioned behind him.

In a second, Justin and Hailey can be seen hugging and repeatedly kissing for the photographers.

You can watch the two full videos of Justin and Hailey below.