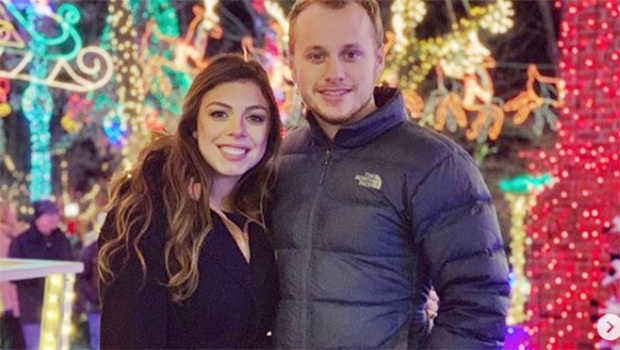 Josiah Duggar and Lauren Swanson have been married for six months, but will they be growing their family any time soon? The reality stars’ latest Insta post seems to have the answer. Take a look!

It looks like Lauren Swanson, 19, is putting pregnancy rumors to rest! Instead of responding to all of the speculation on social media, she and her husband Josiah Duggar, 22, posted a pic of the newlywed looking teeny tiny in a tight dress. No sign of a baby bump there! But while the couple wasn’t announcing that they had a baby on the way, they did have something important to share — their six-month anniversary! “Can’t believe it’s already been 6 months since I married you!” Josiah captioned the sweet shot of his wife. “You were the best decision I ever made! Love u sweet heart.”

In the festive pic, Lauren was taking down their Christmas tree in a long-sleeve red dress, a big smile on her face. There was a box of pinecones and holly berries beside her, and in the video that followed, the Counting On star could be seen removing a gold ribbon. “This is my least favorite part of the tree,” Josiah said from behind the camera. “You sad leaving 2018, baby? I am. But if you don’t’ leave 2018 you can’t go to 2019, and it’s been six months yesterday.” Lauren clarified that it had been six months since they tied the knot and said, “Best day ever.” Aw! And as if that wasn’t sweet enough, they closed out the footage by each saying they loved each other.

Josiah and Lauren got married over the summer and have been looking so happy together ever since. And while many of the Duggar siblings before them had honeymoon babies, it doesn’t look like these two will be following in those footsteps.

So here’s to Josiah and Lauren’s six months of marriage! Whenever they decide that it’s the right time to grow their family, they’ll probably make a sweet announcement. But until then, we hope they’re enjoying the early days of their marriage as much as they seem to be!