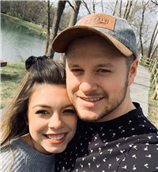 Marriage and family are not matters that the Duggar family takes lightly.

In fact, Duggar women are raised from a young age to believe that procreation is their primary reason for being.

As a result of all this focus on the sanctity of baby-makin’, divorce is virtually unheard of in the Duggars’ world.

Hell, even after her husband was convicted on child pornography charges, the idea of leaving him was reportedly unfathomable to Anna Duggar!

So the rumors of a Josiah Duggar-Lauren Swanson divorce have always been met with a great deal of skepticism by both Duggar fans and critics.

But the evidence keeps mounting, and it looks more and more as though these two have at least separated on a trial basis.

Just a few weeks ago, the Josiah and Lauren had pages and pages of posts, like most users.

Now, they’re down to just a scant six photos, most of which show Josiah on his own or with members of the Duggar family.

Only one of the remaining photos features Lauren.

But the biggest clue that these two have called it quits comes to us from an unexpected source.

For the most part, it resembled the usual Duggar shindig (alcohol and secular music replaced by copious quantities of fried food, etc.), but eagle-eyed fans spotted one very important difference with Josiah.

Not only was he unaccompanied — wife and daughter nowhere to be seen in the lengthy clip — it also looked as though Josiah was not wearing his wedding ring.

Now, the father of one was eating in one shot and playing foosball in another, so we suppose it’s possible that he took his ring off for those purposes.

But we doubt it.

Not surprisingly, fans have been quick to raise questions about the couple on Instagram.

“I am so interested to know what’s going on with Josiah and Lauren,” one user recently wrote, according to In Touch.

“Does anyone know anything about Josiah and Lauren? They haven’t posted in a year,” a second observed.

Josiah and Lauren have remained quiet in the face of these inquiries, but Jessa spoke out on the couple’s behalf last month.

“They’ve chosen not to be active on social media anymore, but they’re doing wonderful! Thanks for asking!” she wrote in response to a fan’s comment on her YouTube page.

Of course, the divorce rumors date back to long before Josiah and Lauren deleted most of their Instagram pics.

Counting On viewers picked up on tension between the two in a scene from way back in 2019.

“Have you ever seen a wife jerk away more quickly from a kiss with her husband?” one Reddit user asked at the tine.

“Their relationship makes me so uncomfortable. He constantly looks like he can’t stand her,” another chimed in.

Josiah, of course, is unique among his siblings in that he’s actually experienced a breakup before.

The courtship between Josiah and Marjorie Jackson marks the only time that one of Jim Bob and Michelle’s offspring entered a romantic relationship that did not result in marriage.

So will he also be the first among his siblings to file for divorce?

It’s too soon to tell, but if he is, we can only hope that Anna will be inspired by his example!