Josh Duggar was supported by his wife Anna on his way to court on Thursday in Arkansas for a pre-trial hearing ahead of his upcoming child pornography trial.

Duggar, who appeared in TLC’s “19 Kids and Counting,” was charged in April with two counts of downloading and possessing child pornography. The 33-year-old faces up to 20 years in prison and fines of up to $250,000 on each count if convicted. The former TV star has pleaded not guilty.

Before the hearing got underway, Duggar was seen walking into the court hand-in-hand with his wife, who announced earlier this week the birth of their seventh child together.

According to a local KNWA reporter on the scene, Judge Timothy L. Brooks ordered an evidentiary hearing with witnesses to take place on November 29, which is just one day before his trial is scheduled to begin. 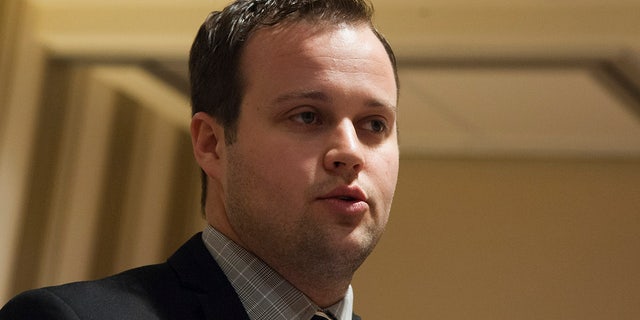 The former "19 Kids and Counting" star faces up to 20 years in prison and fines of up to $250,000 on each count if convicted.
(Kris Connor/Getty Images)

One day before Duggar’s court appearance on Thursday, Judge Brooks ruled on several motions filed by both sides in the case. Per the Nov. 17 filing, Duggar received a small victory when Brooks denied the prosecution’s motion to allow a statement Duggar made on Facebook in 2015 in which he admitted to his pornography addiction as evidence.

The judge did note, however, that if Duggar “takes the stand and testifies that he did not view adult pornography or was not addicted to pornography, or if he otherwise contradicts any statement he made in the social media post in 2015, the Government may seek to leave to introduce the statement to impeach his credibility.”

In terms of a motion about sequestering witnesses, Judge Brooks ruled that “any witness who has testified – including the Government’s designated case agent sitting at counsel table – is prohibited from discussing the substance or his or her own testimony with any witness who has not yet testified and been formally excused from their obligations as a witness. Defendant and his witnesses will be subject to the same sequestration rule.”

He also noted that “the Court’s rule does not limit counsel from conferring with their own witnesses and preparing them to testify.”

The judge also weighed in on Duggar’s motion that asked the court to prohibit the government from sharing at trial that he refused to answer questions to him posed by law enforcement during an interview on Nov. 8,  2019.  Duggar’s legal team essentially wants to exclude 10 separate statements he made invoking his Fifth Amendment right to remain silent. Brooks granted the motion with the instruction that the court “request a sidebar and make its argument outside of the presence of the jury” if the need arises.

TLC pulled “19 Kids and Counting” in 2015 over revelations that Duggar had molested four of his sisters and a babysitter. Duggar’s parents said he confessed to the fondling and apologized.

The former star of ’19 Kids and Counting’ was arrested in Arkansas in April.
(Washington County Police Department)

Duggar has also apologized for his pornography addiction and for cheating on his wife.

His jury trial is scheduled for Nov. 30.