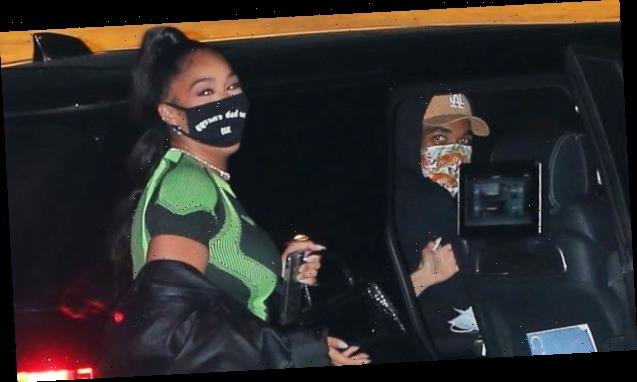 Jordyn Woods revealed how she and Karl-Anthony Towns entered a ‘relationship,’ after being ‘best friends for a while.’

Jordyn Woods, 23, revealed what she and her new boyfriend Karl-Anthony Towns, 24, “connected” after both experienced similar losses. Jordyn explained how this led them to transition their relationship status from friends to lovers during a video interview with Extra, which was uploaded on Sept. 29. The subject was brought up after Jordyn recently became Instagram official with the Minnesota Timberwolves player by using the caption “I found you.”

I found you, then I found me🤍

″People were getting on me about the caption, but I just think that when you find the right one, you can really learn a lot more about yourself,” Jordyn explained to Extra. She added, “It’s about learning to evolve with someone…The right person will bring a lot out of you.”

On that note, Jordyn then revealed what made them “evolve” their relationship: “And I think that we’ve been friends for a long time, and naturally we really connected over both of us losing a parent at a very young age. So, it was a very organic relationship that we’d been best friends for a while.”

There are darknesses in life and there are lights, and you are one of the lights, the light of all lights 💫

Karl recently lost his mother, Jacqueline Cruz, who was just 59 years old when she died after contracting COVID-19 in April of 2020. Jordyn understood this heartbreak, because she lost her father John Woods just two weeks after being diagnosed with cancer in 2017. Both losses were sudden and tragic, but fortunately, Jordyn and Karl have been pillars of support for one another.

“Jordyn and her family know exactly what he’s going through so they’ve been there for him every way they can…She’s trying to help him through a tough time as a friend, she’s very caring,” a friend of Jordyn’s EXCLUSIVELY told HollywoodLife in August, before the model’s relationship with the NBA star became romantic. A few weeks later, another source close to Jordyn EXCLUSIVELY told HollywoodLife, “Jordyn and Karl got closer and it just naturally grew into them falling in love. They kept it to themselves at first because they didn’t want the pressure, but they’re in love and they just couldn’t hide it anymore.”

Jordyn and Karl made their feelings towards one another very clear during Jordyn’s birthday festivities in Mexico! Karl tagged along with Jordyn’s family and friends for the tropical getaway, and fans realized that the two were dating after watching a video of the birthday girl getting cozy with Karl on a yacht on Sept. 23 (the day Jordyn turned 23 years old).