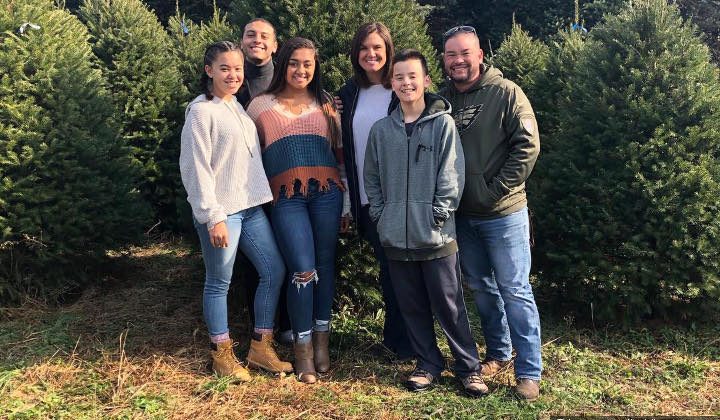 AceShowbiz –Jon Gosselin‘s son Collin and daughter Hannah, both 14 years old, were spending Christmas this year with Colleen Conrad. Besides spending the holiday with their father’s girlfriend, the teenagers were also enjoying the day with her children, Jordan and Jesse.

On Tuesday, December 25, Gosselin posted a photo of the Christmas memories on Instagram. The image was of Gosselin, Conrad, and their children posing together with the glittering Christmas tree and decorated fireplace as their background. Accompanying the picture, Gosselin wrote, “Merry Christmas and Happy Holidays from our family to yours!!!”

The TV personality posted a similar photo last month. It was a photo of his and Conrad’s children at a pine tree farm, where they searched for the perfect tree to decorate. They all beamed at the camera as they posed in front of the tree of their choice. “Found our tree,” he wrote, adding a pine tree emoji. “Let the holidays begin!!!!”

However, in both photos, four of the sextuplets and the twins he shared with ex-wife Kate Gosselin were absent. This might be because the 41-year-old is currently not on speaking terms with four of his sextuplets, as he previously revealed.

“The other four aren’t talking to me, but they’re talking to Hannah,” he said at WE tv’s Real Love: Relationship Reality TV’s Past, Present & Future panel on December 11 in Los Angeles. “It’s what the kids want to do. If they don’t want to talk to me, that’s fine, as long as they keep up with their sibling connections.”

While his relationship with four of his sextuplets remains cold and stagnant, his relationship with his current girlfriend grew stronger. He revealed at the same panel In Beverly Hills that he was thinking of proposing. “I’ve talked about it, yeah – talked about it,” he said. “She’s driven. I’ve known Colleen my whole life. We grew up three blocks from each other. Her sister used to babysit me.”

Earlier this month, the former host of “Jon and Kate Plus 8” won a custody battle against Kate for his son Collin. A source told Us Weekly that he was granted sole physical and sole legal custody of his son. He won the battle because his ex-wife and her lawyer were a no-show.