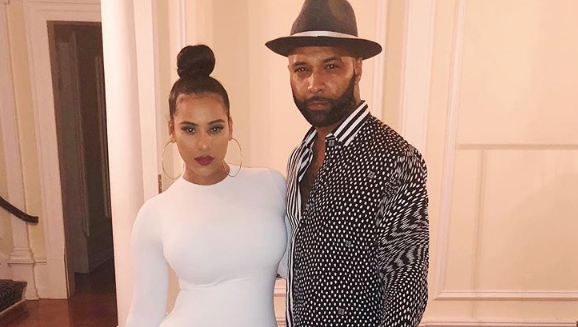 Joe Budden and Cyn Santana are putting a ring on their over two-year relationship! The ‘Love & Hip Hop: New York’ stars got engaged in front of Joe’s podcast crowd — watch the proposal go down, here.

Joe Budden, 38, just pulled off the sweetest proposal during a taping of The Joe Budden Podcast with Rory & Mal on Dec. 19! Cyn Santana, 26, who currently stars alongside Joe in Season 9 of Love & Hip Hop: New York, sat among the audience when her man popped the unsuspecting question. “This is the best relationship I’ve ever had,” Joe said in New York City’s The Town Hall on Wednesday night. “I’m here to ask you the same thing. Is this the best relationship you’ve ever had?” After a pause, he added, “Prove it to me,” and got down on one knee.

The crowd went wild, and Cyn said equally sweet words when she finally made it on stage! “I want to spend this life and my next life with you,” the VH1 star said into the mic. Watch the proposal from start to finish below! Cyn was especially thrilled about her shiny new bling from Joe, which she flashed to the camera in an Instagram video while belting out to Beyoncé’s hit, “Love On Top.” We’re ecstatic to see this love story come full circle, from the small screen to a diamond ring.

Joe and Cyn actually appeared on Seasons 3 and 4 of Love & Hip Hop, although not as a couple. The earlier seasons were filmed in 2013 and 2014, long before they became an item in July 2016. Cyn even admitted that her now fiancé didn’t use to be her favorite person! “I couldn’t stand Joe because he comes of as a f***ing dick,” she told Latina in Nov. 2016. “I don’t know. It just happened. It was very organic. I’ve known Joe for like six years and never looked his way.” The lovers went on to welcome a child, son Lexington Budden, on Dec. 15, 2017.

We love ourselves a good ol’ public proposal. We wish Joe and Cyn even more happiness as they continue to live in their New Jersey mansion, now as an engaged couple!