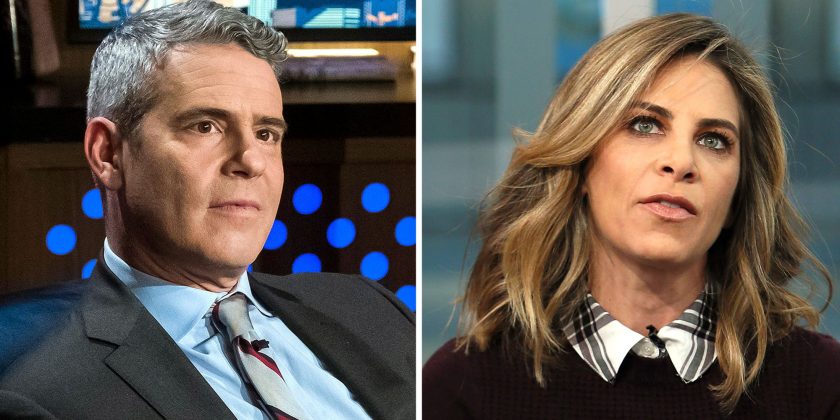 It’s far from over. The longtime feud between Jillian Michaels and Andy Cohen rages on as the personal trainer reflected on her “truly hideous experience” with the talk show host.

“We’ve not been friendly for years,” Michaels, 44, exclusively told Us Weekly at the first annual live iHeartRadio Podcast Awards Presented by Capital One® on Friday, January 18, about her tumultuous relationship with the television producer. “I did his show once and it was a really awful experience,” she said before calling the Emmy winner “extremely rude … condescending and unprofessional.”

She continued: “I thought when we met that we were gonna be, like, gay homies” – but their meeting, according to Michaels, was a far cry from cordial. The Biggest Loser alum recalled being “exhausted” while filming the 50-year-old’s series after doing press all day and recently suffering from the stomach flu when Cohen brought out a shotski, which involves several shot glasses attached to a downhill ski.

“So he was explaining [the shotski] to me and I was a little bit out of it and I nodded like, ‘Yeah I got it. So you drink the shot or whatever,’” she said. “He turns around again over his shoulder and looks at me and goes, ‘Do … you … understand?’”

“And this was before the show started,” the former Just Jillian star explained. “And it’s live! So you can’t leave. … At the end of it, I was like, ‘I gotta tell you, that was a truly hideous experience. Like in all the years I’ve been doing this, nothing like this has ever happened.’” She also referred to their now-longstanding beef as a “weird little pissing match” that she usually ignores.

The Wish You Were Here author recently slammed Michaels during the final segment of his Watch What Happens Live With Andy Cohen show after she publicly denounced the high-fat, high-protein, low-carb keto diet.

“Tonight’s ‘Jackhole of the Day’ goes to Jillian Michaels, who slammed the keto diet as an awful diet,” he said on Wednesday, January 9. “Don’t feel bad, keto diet. A lot of people think Jillian Michaels is a bad idea.”

Al Roker echoed Cohen’s sentiments about Michaels the following day. “So @JillianMichaels says #Keto is a bad idea,” Roker, 64, tweeted. “This from a woman who promoted on camera bullying , deprivation, manipulation and more weekly in the name of weight loss. Now those sound like bad ideas.”

The 6 Keys writer has since addressed both TV personalities.

“What’s so disappointing is that, for years, I’ve done the Today show. For years, I’ve done segments with this guy,” Michaels said about the journalist in Us Weekly‘s exclusive sneak peek from the Wednesday, January 23, episode of theSkimm’s “Skimm’d From the Couch” Opens a New Window. podcast. “I was always greeted with the ‘Kiddo,’ right? And the big hug and the ‘How’s the family?’ and, like, I always thought we were homies.”

As for her feelings about the WWHL host … she was much more blunt. “Andy Cohen … is just not a nice guy. And I’ve said that for many years,” she said on the podcast. “I had a really crappy experience with him on his show. … He’s, like, constantly looking for, like, a way to pick at me. … He doesn’t do keto. He doesn’t believe in keto. He’s just an a–hole.”

With reporting by Kayley Stumpe