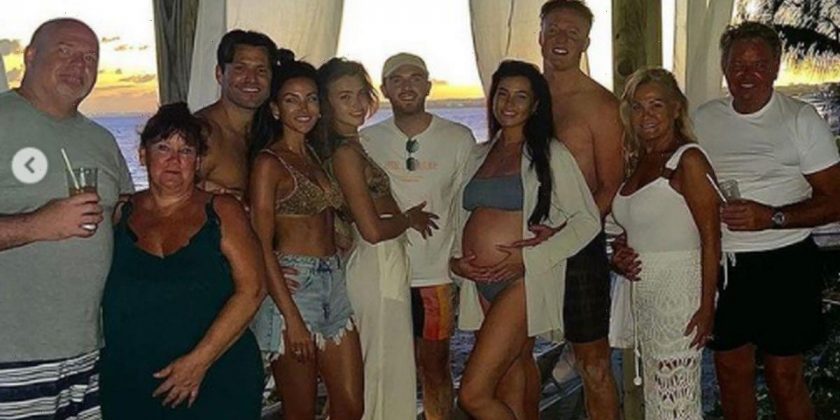 Former The Only Way is Essex star Jess Wright and her sister in law ex Coronation Street favourite Michelle Keegan looked stunning as they posed with family on their luxury break to Turks and Caicos.

Sharing a selection of snaps to her 1.5 million followers, Jess, 36, looked every bit glowing in her pregnancy as she could be seen with her long brunette locks down over her shoulders held back at the front with her sunglasses on her head.

She wore a grey bikini with an open white shirt that showed off her growing bump. Her husband, William Lee-Kemp, was behind his wife and had his hands on his wife’s waist as she held her bump as they posed for the family album.

Jess is expecting a baby boy with William after the pair tied the knot in a star-studded wedding in Majorca.

The mum-to-be revealed that the couple were staying at the five-star Beaches Turks & Caicos while her younger brother Mark was also staying at the resort and they have been joined by more family.

Jess’ sister in law Michelle, 34, also stood out in the snap looking very bronzed with her dark hair half up in a bun.

The actress wore ripped denim shorts and a gold bikini shot as she smiled surrounded by husband Mark Wright’s, 35, family.

Former TOWIE star Mark was also pictured behind his wife and had a hand on her waist as he smiled for the camera.

Jess also shared another two snaps of herself and husband William. The first was a beautiful shot taken behind them as they looked out to the sea and Jess affectionately has her arm William.

The last photo shared by the reality star was her kissing William on the beach as they both had one hand on her bump.

Jess captioned the post: “Making memories with loved ones is what life is all about” followed by a brown heart emoji and sun shining emoji.

Celebs were quick to comment on the post with singer Pixie Lott sharing a heart eyes emoji and three red heart emojis.

While a second penned: “Stunning family” followed by a red heart emoji.

A third added: “Look at those tans” followed by three flame emojis.

For all the latest on Jess Wright, Michelle Keegan and many more stars, sign up to OK!'s daily newsletter.